John Adams and the Fear of American Oligarchy 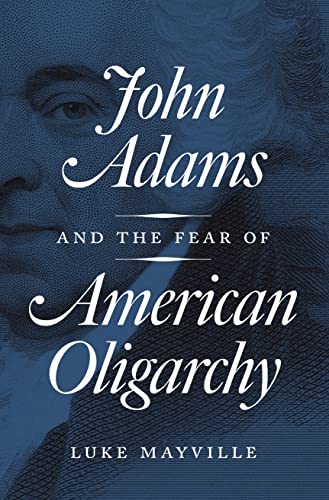 "The prose used in John Adams and the Fear of American Oligarchy is highly readable and thought provoking, breaking down one of the last, great, misrepresented legends in the public memory of a founding father."

"Almost no one had championed the revolutionary cause as vigorously as John Adams," yet in 1786 this co-creator of the Declaration of Independence began "the first of his public efforts to criticize the democratic revolution" of the United States. He compiled two now classic works on people and government.

Thomas Jefferson and others believed that Adams, influenced by his time in Europe as an ambassador and by Daniel Shay's populist armed uprising Massachusetts, "was evidence of a turn to aristocratic sympathies." That conception influenced how the public saw Adams' later presidency.

Author Luke Mayfield writes, John Adams actually "never forsook his identity as a simple New England farmer" and acted "from the conviction that his fellow revolutionaries . . . disregarded essential facts of political life." Adams did draw influence from Europe but "in breaking aristocratic power and establishing true republics, formed upon the basis of equal citizenship."

"It appears that Adams took special pains to absorb the lessons of Machiavelli and other Italian historians" on the infamous failures of Italian republics. He warned of "the unruly many" and "the danger posed by the wealthy and welborn few" rather than "the ancient idea of balanced government."

Adams acted "not from an attachment to aristocrats but from a fear of them" and warned of a "new class of elites" imposing a feudal order by eliminating public education. He warned, "resist the democratic temptation to wish away elite power and in the process to leave it unregulated."

The later president of the United States saw the privileged taking power by "subverting popular representation" and by inhibiting "the effectiveness of government." He even argued for term limits on power. His writings include "an effort to collect and catalog the annals of oligarchy."

"What makes Adam's writings relevant today is not just that he shared our concerns about equality . . . but that he analyzed these features of political life with striking originality." He combined "a lifelong study of political institutions" with "Scottish moral psychology," "the moral-psychological dynamics if the emerging commercial order."

"Adams traced the political influence of wealth not just to its power to buy but to its grip on the human mind." He "repeatedly urged his readers to appreciate sentiments like sympathy and admiration of wealth as less tangible but no less potent sources of oligarchic power." Where a Republican government succeeded, "it managed or counterbalanced oligarchic power."

A revival of interest, bordering on celebration, has happened about Adams. The prose used in John Adams and the Fear of American Oligarchy is highly readable and thought provoking, breaking down one of the last, great, misrepresented legends in the public memory of a founding father.