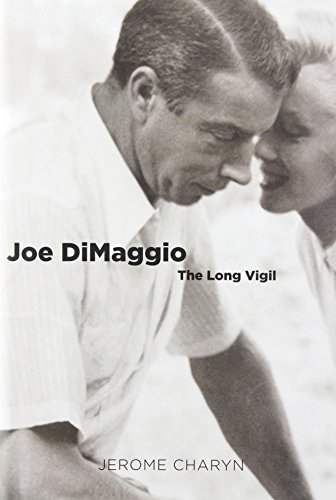 Joe DiMaggio as an autistic ballplayer is an interesting concept. Jerome Charyn explores this theory in Joe DiMaggio: The Long Vigil.

As an incredibly gifted athlete, the renowned New York Yankee excelled at hitting a curve ball out of the park or catching a long fly in center field. But away from the game, he lived a secluded life surrounded by a few select people that he barely even talked to. His social skills were so poor that he had trouble reading his own name off a cue card.

Yet how did such an awkward, insecure man marry Marilyn Monroe? Mr. Charyn feels that the relationship was created as the ultimate public relations move. A nude calendar of Marilyn had surfaced, and she wanted to rehabilitate her image by staging DiMaggio as her real-life leading man. No one was viewed as more stable or reliable than The Yankee Clipper. What she never expected was that he would literally become obsessed with her.

The book is not a straight biography. Mr. Charyn inserts his own opinions and at times writes in the first person. At under 150 pages of text, it is not an overwhelming read. Instead it is a unique look at a man whose iconic status is tempered by very human flaws.

His unbreakable concentration on the ball field left him mentally drained and physically exhausted. This intensely driven quest for perfection was unendurable, yet it was a pattern he followed throughout his life. His sense of discipline was unmatched, but it lacked the heart and emotion that would allow others to connect with him. By keeping himself aloof and distant, DiMaggio, as Charyn describes him, was above the world around him—not part of it.

A poignant passage revolves around DiMaggio’s most legendary achievement—his 56-game hitting streak—in 1941. Mr. Charyn gives a rich, textured account transporting the reader back to that moment in time. Europe is in the midst of World War II, and the United States is on the brink. Americans were nervous, scared, and uncertain. DiMaggio was their national distraction. Would he get a hit? Would he keep the streak alive? His heroics on the field provided Americans with a sense of hope during a dark hour.

For a man who didn’t even talk much to his own teammates, life after baseball became an odyssey of extreme loneliness for DiMaggio. He was like an ex-president: a once powerful man now removed from his lofty position. He was aimless and adrift. He did the autograph circuit until he dropped, making millions, yet achieved little personal satisfaction. He died basically alone in a hospital room reportedly saying his last words to a nurse who was attending him. It was a sad and pathetic end for a life so revered.

While short in length, the book is chock full of details and interesting tidbits. Subjects range from Lou Gehrig and Mickey Mantle to Paul Simon and Frank Sinatra. Mr. Charyn expertly and proficiently covers the major areas of DiMaggio’s life in a succinct manner. Told chronologically, it reads more like a page-turning, in-depth magazine profile than a droll, just-the-facts reference book.

Mr. Charyn looks at the big picture. He encourages the reader to remember DiMaggio for his dogged determination and his strict adherence to duty. He provided inspiration to his team on the field playing through injury and illness. He brutally forced his mind to focus so he would never be seen making a mistake. He gave it his all—every time. While he couldn’t obtain the perfection he so sought and pursued, he never gave up on the two things that mattered the most to him: baseball and Marilyn Monroe.

Overall, Mr. Charyn is able to provide the language DiMaggio lacked in describing his life.