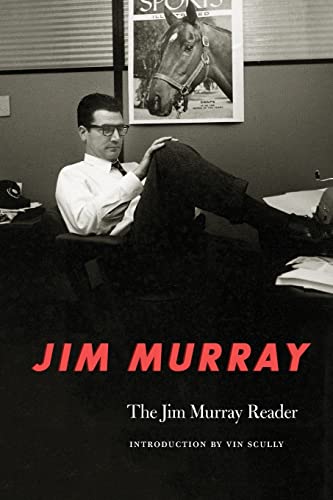 “Sportswriter Jim Murray could write about anything.”

Sportswriter Jim Murray could write about anything. His essay, “Missing: An Ocean of Joy,” is a love letter to the sea, written on the occasion of his moving away from the coast of California. “I have traded white caps for white houses. I shall never be exactly the same person again.”

He could have written about anything, but luckily for us, he chose mostly to write about sports. A sports game, like live theater, is all about drama—in the moment anything can happen. But unlike theater, the outcome is never predetermined. The cliché “that’s why they play the game” is true. A good sportswriter makes you feel like you were at the game. A great sportswriter makes you understand the why of the final outcome.

This book covers columns from 1969–1982, and shows why he won the Pulitzer in 1990. Some of the topics he tackles were obvious: the color line in golf lasted way too long; baseball players make too much money; lawyers are ruining sports.

But look at the strides: Tiger Woods’ dominance in golf and lawyers are trying to broker an agreement to save the upcoming football season. But he would still bemoan the median salary of his L.A. Dodgers’s baseball players—now up to $2,142,838,

Jim Murray covered various Super Bowls and Olympics, but the heart of the book is in the Portraits section. Did you know when someone suggested WWII was not his people’s war, the boxing champ Joe Louis said, “There’s a lot of things wrong with this country—but nothing Hitler can fix.”?

Mr. Murray recounted the thrill of watching Bob Hayes run 100 meters in 10 seconds flat at the 1964 Tokyo Olympics, and the sadness of reporting Hayes pleading guilty to three charges of delivering cocaine in 1979.

I had never heard of Aileen Eaton, a fight promoter who wore Dior, but I learned lots about her from Mr. Murray.

Jack Lambert “plays football like Attila the Hun,” but he has “long blond locks and speaks in a soft baritone whisper.”

“No one ever swung at a golf ball with the purity, the poetry Sam Snead did.”

Did you know Alex Karras went on the pro wrestling circuit to supplement his $17, 500 salary from the Detroit Lions? And Karras said the wrestling crowd was “hard core illiterate—which is a step up from football crowds.”

Mr. Murray’s column mourning the death of Dizzy Dean reminded us that not only did he win 150 games in five years, he also was one of the few white pitchers who cheerfully went on barnstorming tours with the great Satchel Paige.

It’s easy to bash sportswriters at newspapers, a section sometimes called The Toy Shop. Every fan thinks it would be a great life—all those games for free! But the travel and covering bad teams can take its toll.

From this collection, you get the sense that Jim Murray never minded any of that. It is nice to read the work of a true professional who loved his job.