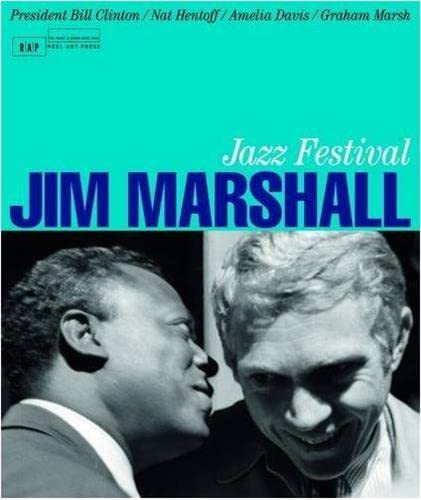 Every now and again a book falls into your lap that refuses to be ignored. Your fingers, seemingly with a mind of their own, open the cover and begin to turn the pages. Other priorities, no matter how important, fall away as your mind immerses itself in the world you are holding in your hands.

Such a book is Jim Marshall: Jazz Festival. Presenting a selection of black-and-white photographs taken at the Newport and Monterey jazz festivals during the 1960s, this publication offers an exclusive look into Marshall’s archives, with over 95 percent of the photographs never having been seen before.

Born in Chicago in 1936, Jim Marshall grew up in San Francisco’s Fillmore district. He bought his first serious camera, a Leica M2 Rangefinder, in 1959. A year later he was photographing backstage at a jazz workshop in San Francisco when John Coltrane asked him for directions to a club in Berkeley. Marshall offered to give him a lift in exchange for a chance to photograph him. Nine rolls of film later, Marshall had found his calling.

This book captures the period between 1960 and 1966 when Jim Marshall was finding his feet as a photographer of musicians and the music scene—before his iconic shots of Jimi Hendrix burning his guitar at Monterey and Johnny Cash flipping the middle finger at him at San Quentin, before his exclusive coverage of the Beatles’ farewell concert at Candlestick Park, before cocaine temporarily derailed his career in the mid-1970s and 1980s. In this book we see Marshall refining his craft, finding subjects everywhere around him, and taking his audience behind the scenes for candid, off-the-cuff glimpses of some of jazz’s biggest names at the time.

Book designer Graham Marsh, who suggests in his introductory piece that readers “stay cool, look sharp and let the music lay a taste on your ears,” has followed up the editing work of Amelia Davis and Tom Nourmond with a well-constructed format. After a foreword by Bill Clinton and an evocative introduction by jazz critic Nat Hentoff, the editors present selected photographs from six Monterey events and one Newport festival in thoughtful, effective groupings. Each section begins with spectators gathering at the venue or resting between sets, moves backstage to catch the performers during unguarded moments, and then captures the energy and beauty of the action on stage.

Founded by Tony Nourmand in 2010, Reel Art Press prides itself in its exceptional taste, curatorial eye, and eclectic selection of material. Without a doubt, Jim Marshall: Jazz Festival is a title in which they may take great pride.

However, the final word must remain with Jim Marshall himself, whose incredible photographs grace the pages of this book. From the cover photo of Miles Davis whispering in Steve McQueen’s ear to the remarkable shot of a tired Percy Heath, head down, smoking a cigar with his arm around his instrument, to the absolutely stunning shot of Ray Brown’s hands caressing his well-worn, beloved double bass, each photograph reminds us that the human eye, while operating in a relatively narrow spectrum, can nevertheless carry us into worlds we never thought we’d have a chance to experience.