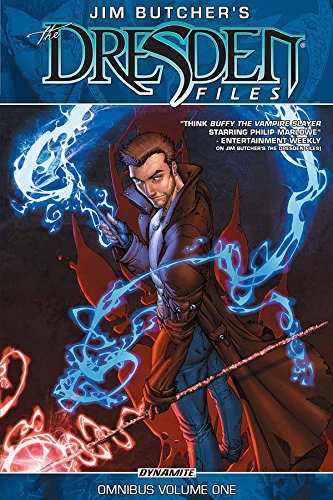 The Dresden Files is an exceptional series of 15 (and counting) novels written by Jim Butcher, in addition to tie-in short stories and a short-lived television series. This graphic novel, Jim Butcher's The Dresden Files, Omnibus Volume 1, includes comic adaptations of two of these novels, Storm Front and Fool Moon, as well as an exclusive-for-comics tale, “Welcome to the Jungle,” and a minor extra story, “Restoration of Faith.”

The Dresden Files universe is labeled as “magic noir,” blending hard-nosed detective mysteries with modern fantasy. Private Investigator Harry Dresden is as likely to cross paths with a gun-toting mobster as he is a club-wielding troll, and more often than not, he crosses them at the same time. Damsels, demons, thieves, vampires, police, faeries, and more all fill Dresden’s world simultaneously.

The four stories contained include:

“Welcome to the Jungle”—Harry Dresden must solve a mysterious murder at the city’s zoo. Stunning artwork fills each page to accompany fast-paced action, likeable characters, and story arcs, setting, and dialogue that are exceptional. Background and explanation to Harry’s life are brief and meaningful, his “powers” explained reasonably, and a stellar tie-in to Greek mythology. Really, if this is your first experience with Dresden, you’re hooked to be a lifelong fan.

Fool Moon—All the cards are down for Harry Dresden, who’s plunged into a vast werewolf conspiracy and murder mystery, where no one is who they seem. This story, though it has all the qualities of the stronger first stories, started to feel a little long-winded by its end. Character motivations and decisions felt forced, although the story itself is fine. Fool Moon is thrilling and filled with intrigue and suspense; only by comparison, one may find this tale weaker than the others, although the artwork, just on par-value, came across as a bit clumsy.

“Restoration of Faith”—A giveaway comic, as part of Free Comic Book Day. A fun story, albeit hokey and the least satisfying tale in the book, though an entertaining read nonetheless.

Overall, it’s a gorgeous book, as visually appealing as its stories are action-packed and engaging. The Dresden Files Omnibus is thoroughly enjoyable and well deserves its critical acclaim, but that the quality of art seems to diminish slightly with each story. This one minor critique shouldn’t take away from the omnibus’s overall strengths, but it was a noticeable weakness; each of the art teams (pencils/ inks/ colors) was different with each story. The first, “Welcome to the Jungle,” was absolutely stellar and seems to set the bar for reader expectations, because following works leave one wondering, “Why do the characters get less gritty and more slapstick?” Again, a minor failing in an otherwise outstanding publication.

Jim Butcher's The Dresden Files, Omnibus Volume 1 is a highly recommended read for anyone with a love of supernatural suspense, paranormal investigation, or urban magic realism.