Jewish Soldiers in the Civil War: The Union Army 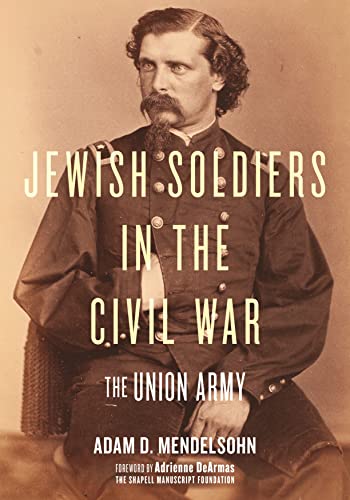 To help combat American anti-Semitism, Simon Wolf published The American Jew as Patriot, Soldier and Citizen in 1895. That book “heralded the heroism and fidelity of American Jewry.” Manuscript collector Benjamin Shapell continued this work with regard to the Civil War. Inexplicably, the Confederate Jews left more writings than those of their faith who served in the U.S. Army.

Historian Adam Mendelsohn now builds upon this earlier research with the first of two volumes on Jewish participation in that conflict: Jewish Soldiers in the Civil War: The Union Army. It is “information extracted from hundreds of thousands of papers and digitalized documents.” Books have appeared on how the African Americans, Germans, Irish, Native Americans, and others fared in the war but nothing nearly as much on American Jewry.

American soldiers carried their religious faiths into battle, even wearing symbols of their respective religions. Despite “ignorant baseless stereotypes,” Jewish men “without abandoning their heritage” “enlisted and served in a war not of their making,” the American Civil War.

Not only was the faith of these soldiers questioned but also that so many were German and immigrants, people held in disdain in an ugly era of American nativism. Prejudices ran so high that Joseph Levy changed his name to Joseph Reese to hide his religion, as did others of his comrades. Joseph A. Joel was protected from anti-Semitic bullying by his superior, later President of the United States Rutherford B. Hayes.

Jews formed the “largest non-Christian minority in either army” but less than one in 100 Americans in 1860 were Jewish and so their numbers in the military were correspondingly small. One in three Jews lived in just New York or Philadelphia. They did include a remarkable number of officers and physicians.

“Jews never formed a majority in any company or the majority of any regiment” although some regiments, such as Jewish Colonel Max Friedman’s 5th Pennsylvania Cavalry encouraged Jewish enlistment. The regiment had only 44 Jewish officers and men, out of 1,200 soldiers, however, but it still had one of the highest numbers of Jewish members of any federal regiment.

“Jews often passed unnoticed” and anti-Semitic writers falsely implied that they did not serve in the Union military and that vast numbers of Jews who did not exist remained in the Confederacy during the war. Jewish federal soldiers found themselves isolated. The documents assembled by the Shapell Manuscript Foundation make the real experience of this relatively small group of Americans visible.

Even Jewish families could be divided over politics, as often were the Christians. Abraham Jonas, for example, had five sons in the Confederate army, but his youngest boy fought for the Union. Prominent Rabbi Morris J. Raphall opposed the war while his son Captain Alfred Raphall returned to the fighting after losing an arm at Gettysburg! Each ethnic group had the problem of defining itself within the war including Jewish people.

The Jewish soldiers shared the same terrible depredations as their Christian comrades, but they also faced prejudice, although “erratic and inconsistent.” Public perception was that the Jews, two-thirds of their number were immigrants “born everywhere from the Caribbean to the Ottoman Empire” would not fight. Leopold Karpeles, flag bearer of the 57th Massachusetts, and many other Jewish soldiers proved otherwise.

“In an age where apologetics is no longer necessary,” the author chooses, however, to “focus on those areas where Jews stood apart.” When the armies of the Civil War marched, their “public expression of faith was overwhelmingly Christian.” Jewish soldiers had to put up with pork rations and no consideration was given to their faith, even with regard to burial.

Because the number of Jewish soldiers proved so statically insignificant, the author uses anecdotes to tell the story of the whole in an Annalise format. George Kuhne was executed as a deserter. Marcus Spiegel enlisted for the money and served as a captain before his death in battle in 1864. Minna Michaelis lost two sons in service during the war and had another disabled from wounds at the battle of Antietam. Philip Haas was a photographer. Frederick George d’Utassy “realistically speaking” did not exist!

Although an annotated scholarly work intended to illustrate “the endless possibilities for reimagining and reinterpreting American Jewish history,” Jewish Soldiers in the Civil War is also a physically attractive book with color illustrations. Everyone’s book should turn out so well! Jewish Soldiers in the Civil War has three appendices of data from the Shapell Roster of Jewish service in the American Civil War, an ongoing project to identify Jewish participation in that conflict.