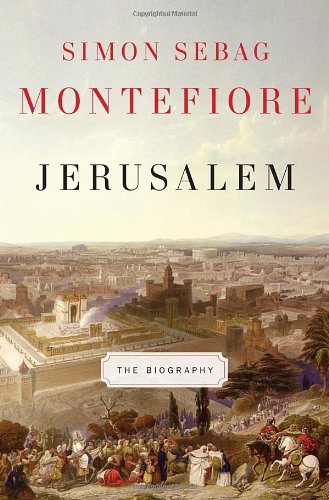 “Despite its strife riven past, Jerusalem is a vibrant, beautiful city, and the extensive history covered in Jerusalem: The Biography helps to bring its past alive.”

Jerusalem has inspired love poems from warriors and violence from saints. It is a city of gold. The light reflects from its stones in a way that you will never see anywhere else. Each stone you walk on and brush against might have been put in place yesterday—or it might have been part of a structure that predates written history. One can hardly tell what period the stones are from for they are all infused not only with golden light but also with a very long and important history.

I recall walking down stairs to the Hurva synagogue in the Old City with my grandfather, who was born and grew up just a few steps away. When I visited, it was a below ground-level excavation of stone rubble; and to the untrained eye it did not look much different from other excavations of Jerusalem’s many historic layers, ranging from prehistoric to the time of King David to the rise of Christianity, from the Arab Conquest to Ottoman rule—all the way to the present. And the site of the synagogue may indeed represent elements from all of those periods.

But for my grandfather, it was a place from his youth, and he brought it alive for me. He pointed out where the mikvah was (and I could still see a stone basin from the ritual bathing area there); then he noted the benches where he and his friends used to sit. In fact, archeological evidence from the site showed mikvot dating from the first century of the Common Era. The synagogue I was walking through dated from 1700 with major renovations from the 1860s. It was destroyed by the Jordanians when they fought for and occupied Jerusalem in 1948 after the UN Partition Plan was supposed to make it an international city in which all places of worship were preserved.

(All Jewish synagogues were destroyed during the Jordanian occupation. And although this reviewer attempts to be politically objective, I must disclose that the gravestones of my family were desecrated and used as latrines during the Arab occupation of the city).

Last year the Hurva synagogue was rebuilt. It has a vaguely Ottoman appearance, and I suspect that visitors will often make the same mistake that I did. It will appear to blend in with all of the rest of Jerusalem history, while at the same time it is a living, contemporary place of worship.

Simon Montefiore’s new history of Jerusalem also brings the stones of the city to life. Jerusalem: The Biography is a masterful historical work, making use of contemporaneous sources, modern archeological discoveries, and ages of historical documents.

Mr. Montefiore uses clear and serviceable English to describe the intrigues of the dynasties that ruled or vied for power over the city, and then describes much of the building that resulted, as well as the ever changing balance of power between Jews, Christians, and Muslims (and perhaps more importantly between the various denominations and families within each religion).

It is not often a pretty history. The butchery and brutality that was perpetrated for the past thousands of years in the name of religion is truly shocking. The occupants of Jerusalem have been slaughtered in every historical period, by every occupying power. Holy places have been desecrated and destroyed. Access to the site of the ancient Temple has been denied to others by whatever religion currently holds it. Today it is the site of mosques, and a small section of what used to be the retaining wall to the Temple Mount (the Western Wall) is reserved for Jewish worship.

One might be tempted to think from news reports that the conflict between Jews and Muslims is age-old. It is not, but Jerusalem has long been the source and site of conflict between just about everyone. Mr. Montefiore’s history is accessible to anyone, regardless of belief system, providing a good summary of the first civilizations to the present day inhabitants.

The knowledge of sources required for this project is incredible. They range from an intimate knowledge of the scriptures to the latest archeological finds. One might quibble that during the early Christian period, Mr. Montefiore seems to take the Gospels as, well, gospel. Documents written for religious purposes generations after the events may not be the most accurate sources. But perhaps in the absence of contemporaneous accounts of Jesus, the New Testament is the best one can do.

If there is any lesson to be drawn from this extensive history, it is that people have killed each other and engaged in the ugliest of human behavior in Jerusalem—all in the name of religiosity. Nearly every group examined in Jerusalem: The Biography has suffered victimhood at one time—and nearly every group has acted as the oppressor as well.

Despite its strife riven past, Jerusalem is a vibrant, beautiful city, and the extensive history covered in Jerusalem: The Biography helps to bring its past alive.