The Jersey Brothers: A Missing Naval Officer in the Pacific and His Family's Quest to Bring Him Home 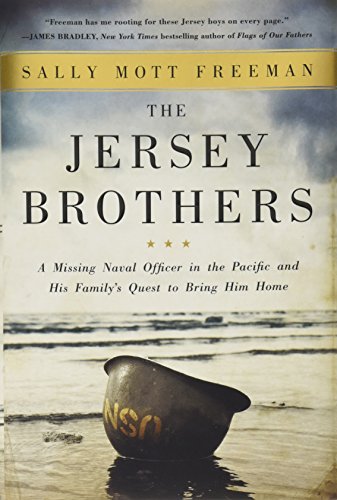 “The Jersey Brothers demonstrates that a well-told story is just that, whatever its genre.”

The brothers Benny and Bill Mott made their family of Eatontown, New Jersey, one with the U. S. Navy. Graduates of the Naval Academy; they served in important positions during World War II and even enlisted their sister.

This family's story is now told in The Jersey Brothers by media executive Sally Mott Freeman, Bill Mott's daughter. The book is extensively researched and has the benefit of surviving family papers, including the diary of the brothers' mother Helen Estelle Chamberlain.

Benny commanded the anti-aircraft batteries on the famed aircraft carrier Enterprise, including when it was all that reminded of America's carriers in the Pacific fleet. He and his shipmates risked death in battle on more than one occasion. Despite the best efforts of many people, the Enterprise finally succumbed to the scrap metal yard after the war.

Bill Mott should have washed out of the Navy because of his eyesight, but his ambition in other fields brought him back into the service and into a critical role in the highest echelons of power. Later he served in action in the Pacific. His career was improbable, but the needs of World War II created many thousands of such unlikely stories.

The brothers' ambition also included their half-brother Barton Cross. He became "bilge" (flunked out) of the Academy, but Bill managed to obtain for their baby half-brother a commission as ensign in the Navy Supply Corps in the Philippines.

Barton thus began a series of misadventures of epic scale. He arrived in the Philippines in November 1941, just in time to be wounded in the Japanese attack on Cavite base on December 10, two days after Pearl Harbor. Douglas McArthur's incompetence left the Philippines open to invasion and Barton's ship the Otus left him behind in its hurry to escape.

A bureaucratic omission left all of the Navy's wounded behind. Barton was transferred from one facility to another as all of the prisoners suffered constant abuse by their captors. The prisoners died "daily from gangrenous wounds, disease, and starvation, but also from dispair." Barton's fate would be different.

Despite Bill's connections, including a personal friendship with President Roosevelt, Barton Cross disappeared with thousands of other American servicemen in the Philippines. As the title of the book implies, the story of finding him is a major thread in this book.

The Mott-Cross family was exceptional in many ways. They were largely English. The children of divorce, the Benny and Bill had issues within their second family and English-born stepfather Arthur Barton Cross. Their mother Helen was one of the country's few women college graduates. The author writes that Benny and Bill "always seemed to be seeking her attention and that Barton was always trying to break free of it."

These difficulties were mitigated somewhat by the local prominence of the estranged father's Mott family. Even if treated as second children, Benny and Bill still lived in a comfortable upper middle class family that most Americans could only aspire to; the Mott-Cross family managed in the Great Depression.

Bill and Benny had always looked after little brother Barton, and then they did whatever they could to bring him home. A good book could be written on American brothers serving together in World War II, including in the sudden mass death in the sinking of a single ship. As the author notes, on the Arizona at Pearl Harbor alone, "1,700 men perished, among them 23 sets of brothers."

Millions of such stories of American families in World War II could be told. Each such history is memorable and, with good writing, an important personal way to experience the history of those times on different levels.

The Jersey Brothers could stand as a model for such work. It is better than fiction because it is real and adds in educating and in suspense by being based on facts. The Jersey Brothers demonstrates that a well-told story is just that, whatever its genre.

The author could have made the identity of the characters easier to understand, at least at the beginning of the book. Even Freeman's own relationship to the characters really goes unexplained. Too often, the author fills in gaps in information with colorful narrative.