Jeremy Worried About the Wind 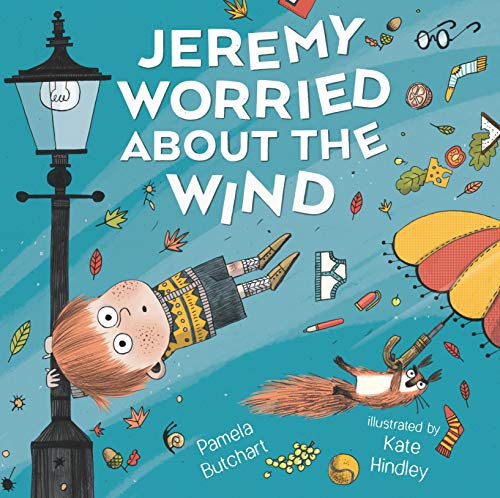 “For parents who want to reassure anxious children, this book will be a useful tool.”

Jeremy is a worrier, with wide eyes and a look of frozen fear humorously captured by Kate Hindley’s lively illustrations. The author, Pamela Butchart, opens the book with a list of Jeremy’s worries, from mismatched socks to evil squirrels. Realistic worries, like burnt toast, are mixed with fantastical ones, like shoe-eating worms. If the story had progressed from realistic to imaginary, the humor would have been more effective. As it is, the randomness flattens things.

Jeremy’s biggest worry is the wind, although why the wind should trump all his other fears isn’t clear. Yes, Hindley has a dramatic double-page spread of the wind sweeping away a range of objects while Jeremy desperately clutches a lamp post, but it would help to have Jeremy say something, describe all the ways the wind terrorizes him. This lack again flattens the plot just when it could have been heightened.

And then the worst does happen: a big gust of wind picks up Jeremy. A wordless sequence shows Jeremy’s dramatic adventures, including a pirate ship and a helicopter rescue. Somehow this experience changes his mind. When he gets back home and finds Maggie, he’s a different person:

Here’s where the art could have made up for what the text lacks. If the illustrations had shown Jeremy growing in confidence, slowly enjoying himself, the experience would make satisfying sense. As it is, he looks upset and scared until the very end, when he’s hanging onto a rope dangling from a helicopter, safe from all the threats. Even here, he doesn’t look excited or happy as much as relieved.

Still, the author tells us he’s learned his lesson and now he’s the daring one in the pair of friends, asking Maggie, “What’s the worst that could happen?” For parents who want to reassure anxious children, this book will be a useful tool. At its best, it could inspire young readers to draw their own worries. For those looking for a better choice on the subject, check out Kevin Henkes’ Wemberly Worried.