The Jefferson Rule: Why We Think the Founding Fathers Have All the Answers 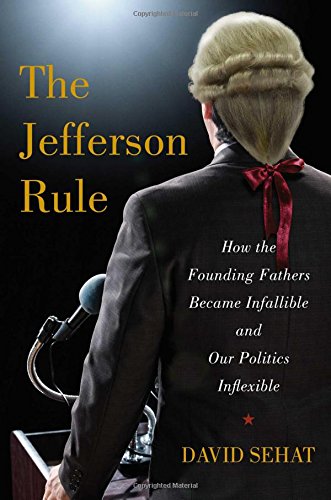 On July 4, 1866, George Bailey Loring gave a speech. He spoke about the founding fathers, and what they did not do. “For the control of rebellious States, the fathers left no rules; for the conduct of our treasury in civil war, they laid down no system of finance; for diplomatic dealings with foreign powers, while our government was threatened with disruption, they provided no precedent.”

Whenever an issue of national proportions comes up someone inevitably brings up our “founding fathers.” Everyone seems to know what those several men thought and would say if they were only here today. Many politicians believe that what the founders said, and how they said it, applies today—without exception or interpretation.

In David Sehat’s new book, The Jefferson Rule, we have the opportunity to read about what those men wrote and consider whether those thoughts and words from 239 years ago remain applicable. More often than not, according to Sehat, they do not.

Jefferson, Madison, Adams, Franklin and the rest never dealt with the type of issues facing the country today. The country as it exists today was not in their frame of reference.

Thomas Jefferson, for example, did not favor a strong federal government. He argued in favor of giving most power to the states. Jefferson was not an apologist of the proposed Constitution as a vehicle to replace the existing Articles of Confederation.

Yet as Sehat’s book points out, when Jefferson became president, he was not averse to embracing “. . . a sweeping notion of national power . . .”

Sehat provides readers an easy to understand, pleasure-to-read discussion of how misinterpreting the intentions, words, ideas and beliefs of the “founding fathers” has created countless problems for the United States as it progressed over the past 239 years.

The United States was conceived as, and continues to be, a grand experiment in representational government. What the founding fathers created had never been accomplished before. In the American Revolution, the colonists took on the most feared army in the world—and beat them.

Written constitutions are not the norm. The U.S. Constitution is viewed as the model for other countries seeking the write their own. The irony is people outside the United States often know more about this republic than Americans do. And that is a shame.

But David Sehat provides a tool that everyone can use to remedy the situation. His detailed analysis of major events in U.S. history explain why calling on the “founding fathers” as a form of historical muse too often leads us into a morass of problems. His writing is comprehensive but not dense. At times, it seems he is conversing with the reader hanging on every word.

Sehat gives the reader a clear explanation of how the founding fathers, all of whom were educated, property owning white men, manipulate the documents they wrote to make this new country work. This makes the book a page-turner.

The founding fathers favored “deferential politics” and rejected political parties. They envisioned that only white, male property owners were capable of governing and voting. They never thought that the general public was capable of such a thing.

It is often said that politicians campaign in poetry but govern in prose. The Jefferson Rule reflects that truth.

When both sides of an issue cite the founding fathers as supporting their position, the perceptive listener understands that it both cannot be right.

U.S. politicians often raise the specter of the founding fathers to justify whatever position they were taking. It continues today. Consider the rhetoric of the endless campaigning for president.

Ronald Reagan invoked the founders during his presidency and gave the country trickle-down economics, and in 1983 created the largest peacetime deficit in U.S. history.

Before joining the court, Rehnquist thought civil liberties should remain the province of the states, not Congress. He was a strict constructionist and wanted to interpret the Constitution in ways that “the Framers obviously meant it to apply.”

Justice Antonin Scalia is renowned for his belief that the Constitution was “fixed at the founding.” Scalia believes that judges must apply the words in the Constitution as they were defined when written.

A contrary viewed was espoused by Justice William J. Brennan, who wrote that originalism was “arrogance masked as humility.”

Sehat includes a profound and thought-provoking comment on the matter from the late Justice Thurgood Marshall,

“[t]he government they devised was defective from the start,

transformation to attain the system of constitutional government

and its respect for individual freedoms and human rights, that we

'The Constitution,' they invoke a concept that is vastly different

from what the framers barely began to construct two centuries ago.”

No one knows what the founders would say about the Constitution today. The times were different. Jefferson and Adams hated each other and did not speak for many years. The irony, of course, is they died on the same day July 4, 1826, hours apart. They were the last of the original American revolutionaries.

Quoting the words and describing the actions of the founders, Sehat offers an insight into how the penchant for invoking the founding fathers has too often failed the country. Those men that formed this grand experiment expected and hoped the country would grow and not stagnate. They never expected the status quo to continue. After all, their actions vanquished the status quo as existed at the time.

The Jefferson Rule is a fun, challenging, and thoughtful book. And if the reader develops a more realistic view of what the founders thought, and how that might apply today, so much the better.