Jefferson, Madison, and the Making of the Constitution 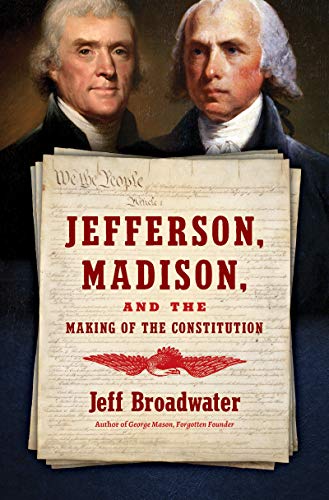 “Working together during a very fragile time in our nation’s history, when there were no assurances that the United States would even exist beyond the 18th century, Jefferson and Madison collaborated to create a transformational political document that has stood the test of time.”

Arguing about the U.S. Constitution seems to be in vogue these days, albeit often with a partisan bent. What seems to be lacking is an actual understanding of what the words mean, a task made even more difficult by the passage of more than two-and-a-quarter centuries since it was first committed to parchment.

So what is the key to unlocking its meaning? Well, if you could tap into the minds of two of our founding fathers who were instrumental in creating that document and who, fortunately, left prolific writings to explain their intent as it was first forged, you might make some headway.

In Jefferson, Madison, and the Making of the Constitution, author Jeff Broadwater does exactly that, providing insights into the mindset of the author of our Declaration of Independence—Thomas Jefferson—and the man commonly known as the “Father of the Constitution,” James Madison. Broadwater details how the two were each shaped by political writings of those who preceded them, how they forged a friendship during a crucial time when a new nation was created, and how that friendship helped shape the nation’s governing document.

There were fundamental differences in the philosophies of the two men, of course, and the documents with which they are most commonly associated, but the author tells us that is largely a function of the fact that each document served a different purpose. “The Declaration articulated broad principles; unlike the Constitution, it did not create a framework for a new government.”

For his part, Jefferson believed that “government” was “what rules actually did,” while a constitution, Madison’s baby, “embod[ied] fixed principles, aimed at the public good, under which the people were to be governed.” He was influenced by, among others, England’s Lord Bolingbroke, who “probably helped Jefferson clarify his thinking about the nature of a constitution by distinguishing it from mere ‘government.’”

Madison, on the other hand, applauded Jefferson’s Declaration “as a statement of human rights and of the causes of the Revolution.” Interestingly, while Jefferson was the drafter of the Declaration and Madison the primary drafter of the Constitution, Jefferson’s primary role in forging the latter was that of chief critic. However, his criticisms fueled the fires that ultimately refined the final product.

Madison and Jefferson first formed a friendship serving in the Virginia assembly in 1776 and complemented each other quite nicely. “Jefferson possessed a more fertile imagination, a flare for memorable prose, a better feel for public opinion, and broader interests. Madison tended to be more comfortable with political conflict and more pragmatic but deeper and more systematic in his political thought.”

Broadwater also tells us that they shared a common goal: “Both men sought to reconcile majority rule with individual liberty.” Working together during a very fragile time in our nation’s history, when there were no assurances that the United States would even exist beyond the 18th century, Jefferson and Madison collaborated to create a transformational political document that has stood the test of time.

That is at the heart of this book, which deftly explains how that balance was ultimately achieved in the language of the Constitution once a bill of rights was added. And, each man in his own way left clues as to how they believed the constitution that was ultimately adopted should be interpreted long into the future.

Both men “typically favored a strict construction of the Constitution as it was understood when it was adopted.” [Emphasis added]. But above all, Jefferson wished that “all eyes are opened to the rights of man,” while Madison desired that “the Union of the States be cherished and perpetuated.”

So arguing about the Constitution is nothing new. After all, arguing about it in its formative stages, with a shared purpose of improving its protections and processes, is what made it stronger. It would be a shame if arguing about it now, with fractured purposes of advancing separate political agendas, undermines its strengths. Sometimes one might wonder if Jefferson and Madison are rolling over in their graves.