Jefferson and Hamilton: The Rivalry That Forged a Nation 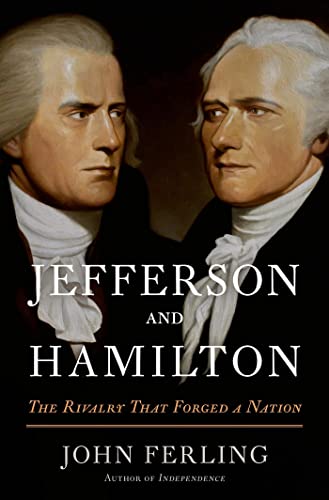 Jefferson and Hamilton: The Rivalry that Forged a Nation is another masterpiece penned by the eminent Revolutionary War historian John Ferling.

This book is a must read for anyone interested in the history of the United States, especially the Revolutionary War period. There is little doubt that both Jefferson and Hamilton had a profound impact on the early republic—individual liberty and states’ rights vs. centralized government and public debt.

At the end of the prologue Dr. Ferling writes, “By 1787 something was clear. The battle lines had been drawn over determining the meaning of the American Revolution and, with it, the contours of the new American nation. “

Those philosophical, social, and economic battle lines still persist today. Thus the clout that Jefferson and Hamilton continue to wield is significant!

Professor Ferling has organized this book quite well. At the beginning he provides a 3-page chronology of the events covered in this work. This chronology is a great timeline that the reader can easily refer to while reading the book. In the Preface the author states, “In the hope of conveying as much as possible about my subjects, I have preserved the original spelling in quotations from Jefferson’s and Hamilton’s writings.”

Dr. Ferling provides two pages of abbreviations. These abbreviations refer to works not otherwise cited. His documentation is extensive including over 50-pages of endnotes. He uses a combination of primary and secondary sources.

The Prologue sets the stage for the narrative organized into four sections. In the first section Dr. Ferling writes a brief family history of both men and their “unhappy youthful days.” This chapter is quite important because it provides the reader with critical background information about each man.

With this knowledge it is much easier to understand how and why each man developed emotionally, socially, and philosophically. This information helps the reader understand the elementary reasons why each man traveled the developmental road he did.

The second section focuses on many of the causes that led each man to join the rebel cause. For Jefferson it was the fact that Virginia was financially strapped by the Seven Years War and as a colony it was not able to print its own money or determine how to develop its economy; and as a result it could not retire its wartime debt. For Hamilton his it was social climbing ambition and a strong determination to fulfill his destiny in the New Promised Land.

This distinction is very important because it was the basis behind their opposition to each other.

In the third section Professor Ferling discusses each man’s political and economic philosophy for a postwar America. They were quite different and neither man could see the flaws in his own vision, but each readily recognized and understood the flaws and debilitating implications of the other’s.

By the end of this section, it is quite obvious that their egos were such that they could not come together and provide the guidance we surely needed then and today.

The last section focuses on the struggle between these two men and their supporters in shaping the future of this nation. For both men this was a period of intrigue, misunderstanding, and at times violence. The partisan bickering between the two camps was a tragedy. Egos and emotions seemed to overrule common sense and logic. It cost Hamilton his life in a duel that at best can be described as foolish pride. Dr. Ferling does a fantastic job of describing this period in our nation’s history.

Both men were quite sincere in their vision for the future. Jefferson was a true rebel who embraced the French Revolution. Hamilton was not really the monarchist he was portrayed to be. His focus was on a strong central government. He was not overly concerned about national debt provided it was not excessive.

Professor Ferling makes it very clear that each man was headstrong, manipulative, and vicious in thought and word when it came to their rivals. Neither man trusted the other. Another important issue that Ferling raises is that the seeds of the American Civil War were sown during the period covered by this book. One has to wonder if that horrible war could have been averted had Jefferson walked his talk about the institution of slavery.

He believed that the institution of slavery not only degraded the blacks but the southern whites as well. In the end Jefferson only freed five slaves; two of whom were children he sired through his black mistress Sally Hemings. She was never freed.

Dr. Ferling, as mentioned previously, has written another superb and unbiased book about the people of the American Revolutionary period. Although this book focuses on Jefferson and Hamilton, the influence of Washington, John Adams, Patrick Henry, Aaron Burr, and others are also discussed in detail.

According to Dr. Ferling, “It was Alexander Hamilton and Thomas Jefferson, more than any others, who shaped the new American nation.” With that said “Next to Washington, Hamilton was probably the most important figure in the establishment of the American Republic.” His ideas prepared the American Republic to become a modern nation state.

Yet at the same time Jefferson’s fears of an uncontrollable, overreaching, big central government at the expense of states’ rights; the loss of individual liberty; and a grossly indebted nation have all come true. One has to wonder what things would be like today if they had been able to get past their egos and distain for each other, to find common ground. Perhaps, just perhaps this nation would not be fractured the way it is today.

Every American concerned about America’s future would be well served to read this book. Professor Ferling does not provide the answer. What he does is provide a lot of thought provoking material for each of us to do some serious soul searching. There has to be a better way.

After you’ve read this highly recommended book you might want to read Almost a Miracle: The American Victory in the War of Independence or perhaps Independence: The Struggle to Set America Free.