The Jealous Kind: A Novel (A Holland Family Novel) 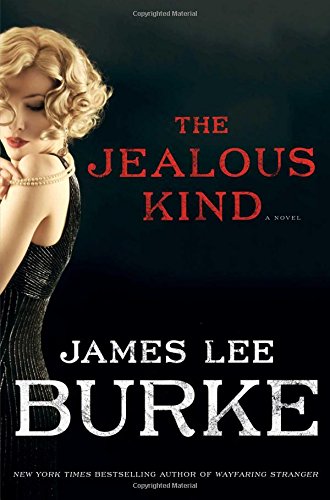 The Jealous Kind (2016) completes the trilogy James Lee Burke began with Wayfaring Stranger (2014) and continued with House of the Rising Sun (2015). The novels, part of the larger Holland family saga, are a riveting amalgam of the conventions of 14th century Arthurian legends and the hard-boiled American crime novels of the 1950s. In all three, taut narrative is interwoven with ruminations on good and evil, courage and cowardice, love and hate, loyalty and betrayal. At the center of each novel is the beating heart of a good man faced with hard choices.

In The Jealous Kind the good man is 17-year-old Aaron Holland Broussard. The spring term of his junior year is over, and Aaron has borrowed the family car to drive from his home in Houston and join his friends on Galveston Beach. Valerie Epstein, “her bare shoulders powdered with sunburn,” her auburn hair gold-streaked, is sitting in a pink Cadillac convertible eating French fries one at a time with her fingers. The moment has the sweet innocence of a scene in a Gidget movie, but unlike Gidget, Valerie is not only beautiful, she is brainy, and Aaron is not a surfer boy whose horizon is limited to gauging the curl of the next wave.

From the moment he sees Valerie, Aaron knows he has entered “a country that has no flag or boundaries, a place where you gave up your cares and your cautionary instincts and deposited your heart on a stone altar.”  Aaron has entered the world of courtly love, a place where the beloved is idolized, and the lover’s task is to make himself worthy of her through brave and honorable actions and through subjecting himself to a series of ordeals to prove his commitment.

In The Jealous Kind, there are allusions aplenty to Arthurian legends and the medieval romance, but Burke has set his novel in what he smartly characterizes as “the Darwinian world of American high school culture.” Aaron Broussard may be a 17 year old living in 1952 Houston, but like the knights in medieval romances he is prepared to take the adventure God sends him, and it’s a doozy.

When a quarrel erupts between Valerie and her country-club boyfriend Grady Harrelson, Aaron steps in. His description of Grady is deft and telling. “He was wearing jeans and sandals and a golf shirt with an alligator on the pocket. A thick strand of hair hung across one eye. Somehow Grady always struck a pose that seemed to capture our times—petulant, self indulgent, glamorous in a casual way, and dangerous, with no self-knowledge.”

Aaron has angered the wrong person, and the repercussions quickly escalate to involve not only his family but also the Epsteins and the Harrelsons. Aaron’s loyalty to his best friend, Saber, draws him into other conflicts. When Saber hangs “his flopper” through the hole in the classroom ceiling directly above the head of a teacher both boys despise, Aaron characterizes the act as akin to those of the trickster from classical folklore who gets even with the pompous and the arrogant “for the rest of us.” But when Saber’s pranks grow more daring and up the ante, he and Aaron find themselves in a cesspool of thugs, criminals, and corrupt police.

The atmosphere of The Jealous Kind is dark and often savage. There is arson and there are beatings, acts of torture and gruesome murders. The battle between the forces of darkness and the bringers of light is unrelenting, and there are many casualties. But the novel ends with the mature Aaron Holland Broussard’s extraordinary encomium to the power of love. “I knew that life was a song, eternal in nature, and the smell and secrets of creation lay in the tumble of every wave that crested and receded into the Gulf. I also knew that the gifts of both heaven and earth would always remain where they had always been, at our fingertips and in the shimmer we see in the eyes of those we love.”

In a recent interview in Texas Monthly, James Lee Burke said he had to wait over 50 years to write the Holland trilogy. Readers of The Jealous Kind will know the novel was worth the wait.

Gail Bowen is the author of the Joanne Kilbourn Shreve mystery series (M&S-17th series novel, The Winners Circle, to be published in 2017); the Charlie D series (Orca Books); and How To Write a Mystery (U. of Regina Press, pub, 2017). Six of the JKS novels have become made for TV movies viewed internationally.