Jane Fonda: The Private Life of a Public Woman 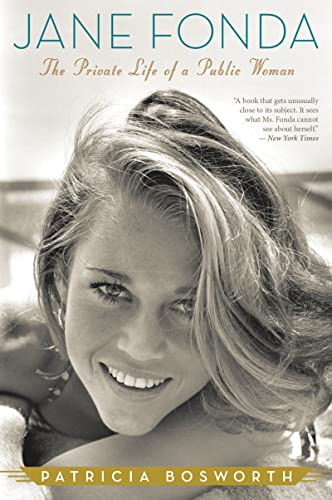 “Jane Fonda: The Private Life of a Public Woman never disappoints. It enlightens, informs, intrigues, . . . Jane Fonda rises above the level of what is expected in a Hollywood biography, just as Jane Fonda has risen above what we expect from a Hollywood star.”

We should all be lucky enough to have our life stories committed to the page by Patricia Bosworth.

Perhaps no other biographer working today is as skilled as she is when it comes to POV. No other writer seems capable of not just spitting out facts and details, but of presenting them from her subject’s point of view so that their heart and mind seem present on the page, as if written in some magic ink that requires only a little lemon juice to make it suddenly appear before the reader’s eyes.

After having already written the most insightful examination of the life of Montgomery Clift in print as well as the tale of the strange existence of photographer Diane Arbus, Ms. Boswell now turns her attention to the life of Jane Fonda.

Or perhaps more on target, the lives of Jane Fonda, for surely no other celebrity—if that simple word can contain the impact she has had on our society and on all our lives—has had more distinctly different reinventions of self as Jane Fonda has had: from the sad-eyed Hollywood child, daughter of actor Henry Fonda, to ingénue in Paris fashions, to Barbarella, to Hanoi Jane, to Academy Award-winning actress, to exercise maven, to Mrs. Ted Turner, to ex-Mrs. Ted Turner, and beyond.

Perhaps Gloria Steinem, whose quoted text from The Revolution from Within is aptly used at the beginning of the book, said it best:

“We are many selves. It’s not just the long ago child within us who needs tenderness and inclusion, but the person we were last year, wanted to be yesterday, tried to become in one job or in one winter, in one love affair or in one house where even now, we an close our eyes and smell the rooms. What brings us together these ever-shifting selves of infinite reactions and returnings is this: There is one true inner voice. Trust it.”

Certainly, Jane Fonda is the dream subject for any biographer. And certainly Patricia Bosworth is the best in the business. So the prospective reader who comes upon this book would tend to expect the best.

And the reader would not be disappointed. Jane Fonda: The Private Life of a Public Woman never disappoints. It enlightens, informs, intrigues, and the reader is easily as interested in the subject matter of the book on page 470 (in which, during the filming of the climatic encounter between father and daughter in the film On Golden Pond, it took Kate Hepburn crouching in the bushes out of camera range, clenching her fists and saying, “Do it! Go ahead. You can do this!” to get Jane Fonda through the day’s filming) as he was on page one.

Certainly some of the reason for the interest is because of Jane Fonda herself. Who she was, who she was born to be, and who she became along the way to becoming who she is today—it’s a harrowing story filled with tragedy (the mother’s suicide, her father’s emotional distance), intensity (the politics, the husbands, the eating disorders, the drugs), and stardust (winner of two Academy Awards, she was the actress of the 1970s, perhaps of her generation, and, as true a true Hollywood icon, her life’s journey contains a thousand famous names and a thousand more red carpets). As humorist Buck Henry put it, “I’d just stand there feasting my eyes on her. She was absolutely ravishing. A great beauty. Those long, long legs, that mane of gold hair. A true movie star, a celebrity with a capital C.”

But more credit for the success of Jane Fonda: The Private Life of a Public Woman must be given to Patricia Bosworth, for her skill both as a biographer and writer. Where others content themselves with timelines, move titles, and the oft-repeated tales from fan magazines, Ms. Bosworth is a writer of nuance, whose portraits contain both shadow and light, she is a celebrant of the human life, in its mix of feats and foibles. Further, she is a researcher without peer, who crams her books with personal interviews and private investigations.

In this book, she celebrates her subject’s life, sharing with her readers what has, in this case, most certainly been the most public of lives lived by the most private of persons. In other words, the subtitle says it all. And Patricia Bosworth makes good on the promise of that subtitle on every page in the book.

It is the friction between these two—a shy, insecure girl motivated by an almost overwhelming ambition for fame and accomplishment that seems to run counter to her very nature—that gives Jane Fonda its special appeal.

Perhaps it is also a matter of “old acquaintance.” Fonda and the author have known each other for decades, since each lived in New York City. And Ms. Bosworth has written about Jane Fonda before. But never with such depth and candor as here.

About their long friendship, the author writes:

“Jane and I have known each other since the 1960s. We were kids then, studying with Lee Strasberg at the Actors Studio. I was an actress for ten years before switching to journalism, while Jane was refashioning herself a Barbarella.

“I wrote my first article about Jane in 1970 for McCall’s magazine. She had just been nominated for an Academy Award for her searing performance as a suicidal marathon dancer in They Shoot Horses, Don’t They? She went on to win Oscars for both Klute and Coming Home, movies that defined her political evolution.

“For the next three decades I continued to write stories about her: when she was burned in effigy as Hanoi Jane, and a couple years after, when the Gallup Poll listed her as one of the most admired women in the world along with Mother Theresa.

“Jane polarizes, and the public remains fascinated by her. She has an extraordinary ability to reinvent herself in response to the times. Consider that she transformed herself from movie star to political activist to exercise guru to tycoon wife and now, in the twenty-first century, she’s turning into an exemplary philanthropist. She doesn’t generate, she reacts—to people, places, and events; everything about the fast-paced, chaotic reality that is American life turns her on.”

Focusing hard on her point, Ms. Bosworth concludes, “She once told me, ‘The weird thing about acting is that you get paid for discovering you have multiple personalities.’ Jane can will herself into becoming whatever she wants to become. Which is why I wanted to write this book about her.”

What separates this book from the other movie star biographies that litter the shelves at the public library and the local bookstore is what separates Jane Fonda herself from the subjects of those other books. Not content with just listing movies and awards and marriages and divorces, Patricia Bosworth instead investigates the evolution of one the world’s most famous and powerful women, Jane Fonda, as she, like Gloria Steinem suggests, moves through her “ever-shifting selves of infinite reactions and returnings”
in search of the self that transcends those selves.

There are myriad stops along the way. And Fonda’s invention and reinventions of self are perhaps best exemplified by the life partners she’s chosen, from French filmmaker Roger Vadim (who not only was responsible for her sex kitten phase, but, more important, for her initial political awakening) to activist Tom Hayden to billionaire Ted Turner, each of whom acted as father figure, romantic partner, and tour guide of sorts into a world as yet unexplored.

There were other guides along the way as well—Vanessa Redgrave and, at one particular key moment, singer and activist Joan Baez, and Yale chaplain William Slone Coffin among them. And Jane Fonda listened to them all and learned from them and then took action. In this way, she is emblematic of her generation in the way she got from there to here.

And in this way, Jane Fonda rises above the level of what is expected in a Hollywood biography, just as Jane Fonda has risen above what we expect from a Hollywood star.