Jane Doe January: My Twenty-Year Search for Truth and Justice 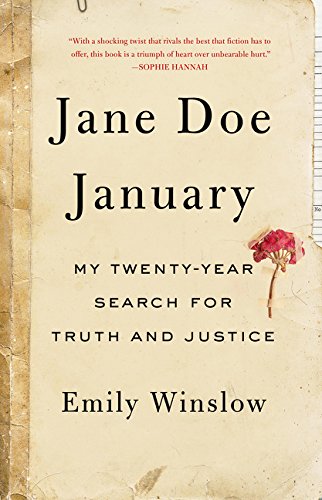 William Faulkner famously wrote, “The past is never dead. It’s not even past.” That is so true for Emily Winslow, author of a memoir Jane Doe January about her rape while she was a college student in Pittsburgh in 1992.

By 2013, Winslow has moved on and grown into an adult woman with an enviable life—she lives in England with her husband and two children and has become a novelist. But she’s never forgotten her past, which comes roaring back to life when authorities discover her rapist through a DNA hit from some semen he left behind.

So begins Winslow’s journey to see justice, to have her rapist punished—finally. Winslow tells us he’s not just raped her but another woman around the same time and, as we learn through Winslow’s reporting, has committed several other crimes for which he has received prison time.

By the time the offender’s DNA surfaces in the federal CODIS database and he is linked to the two previous rapes, he is a free man living in Brooklyn. He fights extradition to Pittsburgh, which is just the first maddening step in the justice system for Winslow.

Winslow becomes obsessed with her case and her attacker and, in this case, perhaps obsessed is too mild a word. There is nothing about Arthur Fryar, her alleged rapist’s name, that Winslow does not want to know. And we’re not talking Facebook or Google stalking here. Winslow goes all out, spending hours on the phone talking to detectives, prosecutors, court clerks, and others to reconstruct the life Fryar has led in the intervening years.

She is a very good reporter and a very sympathetic character and, for a time, we cheer her on.

The problem is that it feels there is too much detail and one wishes she would have left out some unnecessary facts and written a long magazine article instead of a memoir. If you’re Winslow’s family or very close friends, you might find all of this interesting (then again, you might not since, as Winslow points out, many friends shrink from asking her about her college rape even though she’s mostly eager to talk about it).

One particular example: Winslow wonders what it will be like to be cross-examined by a new public defender on the case and researches how the female lawyer handled one of her previous similar cases. For page upon page, we are treated to the way this lawyer questioned another defendant in excruciating minutiae. Then the lawyer drops out of the case never to be seen again. Why not cut all these pages. They make absolutely no difference to the story.

What happened to Winslow was horrendous, but it does not make this a good book; a long article would have done the trick just as well.