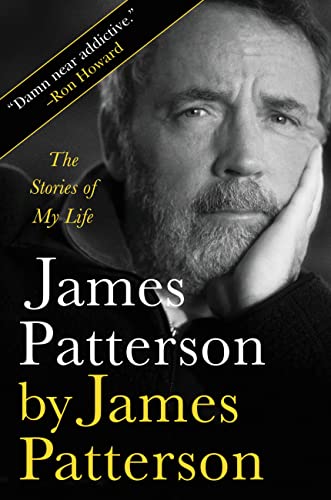 “engaging, gossipy, and revealing—a look behind the curtain at the wondrous wizard of words. Fans will love it.”

For those on literary high horses, crime novelist James Patterson (b. 1947) has always been suspect as a writer. A long-time advertising man (he gave us the jingle “I’m a Toys ’R’ Us Kid”), his 400 books have sold some 300 million copies, making him one of the world’s top-selling authors.

He has more than 30 manuscripts in progress at any time, churned out on an assembly line with lesser-known writers (or celebrities) as co-authors. He dislikes sentences, loves stories, and could not stop writing if he wanted to.

We learn all this in his irresistible memoir James Patterson by James Patterson, which may surprise some hard-ass critics. Written in his trademark short chapters (a tight, concise style inspired by his reading of Evan Connell Jr.’s novel, Mrs. Bridge), the book reveals the man behind all those Alex Cross, Michael Bennett, NYPD Red, and Women’s Murder Club thrillers.

He is a former “ah, shucks” altar boy from working class Newburgh, N.Y.

Besides tales of his life and career, he even offers an apology to a Vanderbilt graduate school professor who told him, “You have the gift. Don’t waste it.” Writes Patterson: “Sorry. You set me on a righteous road, I just didn’t take it where you wanted me to go. I sold out and wrote a bunch of thrillers.”

Does he ever exaggerate? Who knows? He spins some remarkable stories. About working as a young psych aid at Boston’s McLean Hospital, where James Taylor and Robert Lowell were patients. About going to Woodstock. About kicking weed during an 11-day retreat at the Trappist monastery at Gethsemani. About the Hollywood studio that asked him to rewrite his Black protagonist Alex Cross as a white man.

“Growing up, I had zero interest in being a writer,” he says. His passion was basketball. His father grew up in a poor house. His mother taught in Catholic schools. He went to St. Patrick’s grammar school and snacked on communion wafers.

After graduating from Manhattan College in the Bronx, he joined J. Walter Thompson as a junior copywriter, but thought of himself as a novelist in the making. He became CEO of Thompson North America in his thirties.

But he kept on writing fiction.

He became an “unrepentant junkie” about crafting stories. Unpublished for years, he considered himself “a working-class storyteller,” and hit it big with The Thomas Berryman Number (1977), his first published novel, which won an Edgar Award from the Mystery Writers of America.”

His small-town “ah, shucks” recollections sometimes prove wearisome, and there may be too many advertising adventures, but on the whole Patterson by Patterson is a fun, upbeat celebration: “I get to tell stories every day.”

The book is engaging, gossipy, and revealing—a look behind the curtain at the wondrous wizard of words. Fans will love it.