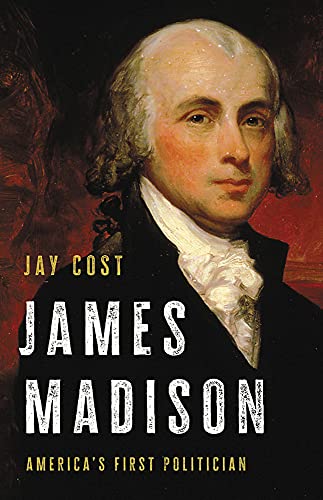 “Cost’s book seeks to relate Madison’s constitutional theory of government (he is often called the Father of the U.S. Constitution) to his actual career in government—as a state officeholder in Virginia, member of Congress, Secretary of State, and President of the United States.”

At a time when many Americans deride “career politicians,” Jay Cost, a visiting scholar at the American Enterprise Institute, has written a biography in praise of America’s first career politician, James Madison. Cost’s book seeks to relate Madison’s constitutional theory of government (he is often called the Father of the US Constitution) to his actual career in government—as a state officeholder in Virginia, member of Congress, Secretary of State, and President of the United States.

Madison, Cost notes, spent 41 years “committed . . . to politics,” and Cost credits him with “not only establishing for us the rules of our constitutional system, but also showing us how to govern within them.” In other words, Madison became expert at the art of politics—or more accurately, the art of governing a large republic by political means.

Madison’s education prepared him for a career in politics. At a Virginia boarding school, Cost notes, Madison studied “the works of Homer, Xenophon, and Justinian,” and probably Locke, Hume, and Montesquieu. He attended the College of New Jersey (which later became Princeton), where he studied Greek and Latin classics (Thucydides, Aristotle, Cicero, Polybius), the Bible and Christian theology, geography, and philosophy.

His education, Cost writes, instilled in Madison a belief “that human beings could utilize the lessons of history and philosophy to build durable institutions of government based on reason.” Yet, like many of the Founders, Madison had a dim view of human nature. He was skeptical, Cost writes, “of the capacity for human beings to see beyond their own selfish passions and act for the greater good of the community.”

That education and the experience of national deficiencies during the War of Independence and under the Articles of Confederation convinced Madison and many others that the structure of government had to change—the central government required greater power if the Union was to survive. And Madison took a leading role in drafting a constitution that established a new framework for republican government.

Cost makes clear, however, that the Constitution was the handiwork of several Founders, not just Madison. Indeed, Madison’s “Virginia Plan” that became a focal point for the Constitutional Convention was modified in order to accommodate the interests of the state governments. Madison had originally wanted the federal government to have the power to veto state laws, which would have effectuated “a complete inversion of the national-state relationship.”

After intense debate and compromise, the convention produced a constitution that generally reflected Madison’s vision of a stronger national government. The next step was to convince the states to ratify it, which Madison, Alexander Hamilton, and to a lesser extent John Jay did by writing The Federalist Papers, a series of essays that drew upon reason, experience, and history to support ratification. Those essays, Cost notes, “would become the most important commentaries on the Constitution,” and are still regularly cited today by lawyers and judges seeking to explain certain provisions of the Constitution.

The ratification of the Constitution was followed by (and conditioned upon) the adoption of the Bill of Rights (Madison wrote the initial drafts of the amendments). “The United States,” Cost writes, “was building a new government by consensus” and compromise. And Madison was at the center of this politics.

In the first Congress, Madison took the lead in formulating a legislative agenda and also served as an informal adviser to President Washington, his fellow Virginian. Soon Congress and the Washington administration divided along party lines. Madison sided with Thomas Jefferson against Washington, Hamilton, and the Federalists. Cost notes the personal antagonisms that developed between the Madison/Jefferson party and Hamilton, but the dispute also involved different visions of government and the nation.

And it is here that Cost appears to side with Madison over Hamilton in the matters of national vs. state power, legislative vs. executive power, and agriculture vs. finance and commerce. Yet later in the book Cost admits that Madison as president adopted many of Hamilton’s policies. Hamilton established a national bank, promoted commercial activities, and in The Federalist Papers had famously promoted “energy in the executive” as a characteristic of good and effective governance, but Madison and Jefferson opposed Hamilton (who had the full support of President Washington) at every turn.

Cost tries to put the Madison presidency in the best light, but Madison’s (and Jefferson’s) neglect of the army and navy, and his failed diplomacy with Great Britain and France committed the country to an unnecessary war with Great Britain that could have been disastrous had the British not been distracted by continental politics. Though Cost does not mention it, Madison failed the first lesson of geopolitics: He went to war with the country whose navy was the only force standing between Napoleon and the United States. (Even Jefferson later recognized this fact).

To be fair, Cost writes about America’s unpreparedness for the War of 1812, and its numerous defeats in the war (including the burning of much of the nation’s capital). And he writes that judged in historical terms, the euphoria of “victory” in 1815 “seems fanciful, if not downright delusional.” But he offsets Madison’s failures with the successes of the last two years of his presidency when he adopted Hamiltonian fiscal policies, emphasized internal improvements, promoted tariffs to protect US industries, and accepted the chartering of another national bank.

Cost is loath to admit that Madison’s achievements in these areas are really Hamilton’s. He recognizes the “brilliance of Hamiltonian economics” but credits Madison for giving those economics “a truly republican character.” “Madison coopted Hamilton’s best economic ideas,” Cost explains, “blended them with his own political insights, and produced a fusion that the overwhelming majority of Americans could support.”

In a final tribute to the subject of his biography, Cost applauds Madison’s post-presidential efforts against John C. Calhoun’s (and Jefferson’s) concept of state nullification of federal laws that edged the country toward disunion, even as he decries Madison’s slaveholding and his refusal to act or even speak against the South’s “peculiar institution,” which was the underlying cause of that disunion and of the horrible Civil War that followed.

Although it is important not to judge historical figures by the values of the present, some might say that Madison approached the issue of slavery in the manner of a “career politician.”