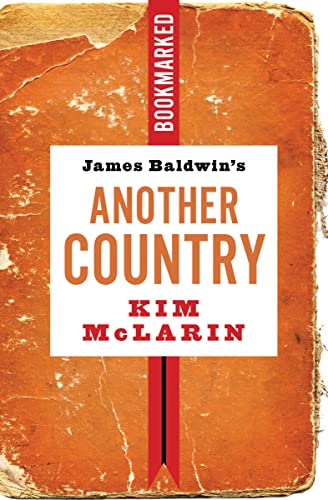 A venture titled Bookmarked has been launched by Ig Publishing. The theory and practice of the series is that a writer considers some other writer’s book that influenced her or him greatly. Either recently appeared, or soon to come, are discussions of such texts as Under the Volcano, In Cold Blood, The Color Purple, and Speak, Memory. Now, in Black History Month, we have a book about James Baldwin’s Another Country, and how much it first mattered and still matters to Kim McLarin.

The arc of Baldwin’s career can be plotted as a sine curve. From his early and explosive start, with seminal essays and the first three novels (Go Tell it on the Mountain, Giovanni’s Room, and then Another Country, in 1962) he established himself as perhaps the premier analyst of race and prejudice and pride in our beleaguered nation. Then, slowly, his views fell out of favor and his cultural currency diminished; now, more than 30 years after his death in 1987, the writing is crucial again. This has been aided, no doubt, by such films as “I Am Not Your Negro” (2016) and “If Beale Street Could Talk” (2018), but Baldwin’s characters and their concerns are just as vivid as when first he wrote and voiced them.

His essays and plays and book-length nonfictions and fictions and a children’s book seem at one and the same time prophetic and contemporary; his searing rhetoric and personal imperatives stay pertinent today. The issues that bedeviled him are, alas, still current; the language with which he addressed them still clamors to be heard.

So it’s good news indeed that an author of Ms. McLarin’s stature—she is the author of several novels and the essay collection, Womanish: A Grown Black Woman Speaks on Love and Life—takes as her topic a novel she greatly admires, and with which she wrangles in personal terms.  And personal they are. The first word of her text is “I,” and the last paragraph of the book is a toast to her husband, “Here’s to you. Here’s to me. Here’s to us.” This is anything but a scholarly text or close analysis of Another Country; its six sections are titled, successively, “Why I Write,” “Women,” “Men,” “Sex and Sexuality,” “Who’s Whoring Who,” and “Interracial Love.” And even though Another Country is her titular topic she refers to W. E. B. DuBois, Booker T. Washington, John Gardner, Daniel Patrick Moynihan, Toni Morrison, Richard Ford, Amy Bloom, Richard Wright, Maya Angelou, Alice Walker, Audre Lorde, Lucille Clifton, David Walker, Harriet Jacobs, Zora Neale Hurston, Lorraine Hansbery, and August Wilson before, on page 21, first naming Baldwin’s name.

We learn about her family and schooling, her professional and sexual and social life, her early failed marriage and her second, happy one; we learn about her reading group, her depression and delights. This is, in short, an autobiographical response to the story of and characters in Another Country, and the ways she’s been “marked” by the book. The plot issues of identity, misogyny, and prejudice are ones with which the writer also wrangles, and she deals with Baldwin’s characters—Rufus, Ida, Eric, Vivaldo and the rest—as if they are alive, still, on the page. More than half a century has passed since the novel’s publication, yet its passionate agon remains. As Ms. McLarin puts it, “This calculation is dangerous but at least it is clear: the problem is whiteness, not Blackness. You ashamed of being Black is not a question for Ida. It is, however, a question for Baldwin himself.”

Since the first-person pronoun is omnipresent in her account, I feel permitted to use it as well.  One of the great gifts of my life was friendship with James Baldwin; we were neighbors in the South of France in the early 1970s. Like Kim McLarin, I was and am an admirer of Another Country, and we discussed it in his house in St. Paul de Vence. This was the period of “Jimmy’s” self-imposed expatriation; he felt himself an exile and was glad for the chance to talk about books. Here’s just one example:

I asked about the source and meaning of his title. Ernest Hemingway, for instance, wrote a fine short story, “In Another Country.” He was quoting, it seems, the phrase from Christopher Marlowe’s play, “The Jew of Malta”: “. . . but that was in another country, and besides the wench is dead.” When I inquired of Baldwin, which of the two usages he referenced in his novel, he told me he was quoting neither Hemingway nor Marlowe but John Milton. As the author of Paradise Lost declares, “The leaf was darkish, and had prickles on it. But in another country, as he said/ Bore a bright golden flower, but not in this soil.”

The words evoke expatriation and the dear dream of being recognized as something more than a weed. I would have welcomed some discussion, here, of the twinned topics of alienation and belonging, of why the author and his characters can “flower, but not in this soil.” Early on, Ms. McLarin writes: “Maybe, if I make a list of all the vital lessons I learned from Baldwin, the answer will reveal itself:

That clarity and courage are required, though they will win you no friends.

That fear is the universal human condition; what matters is how one responds to fear.

That innocence past the time when innocence should have departed is monstrous.

That the artist has an obligation beyond herself.”

This brief book does much to remind us of the ways that literature lasts. The back and forth

between an author, a text and its reader is, or should be, an ongoing one. And Kim McLarin’s “bookmarked” discussion of the enduring resonance of Another Country—though she does not include or date it in her list of “Works Cited”—is one writer’s testimonial to how the language lives. The “obligation beyond herself” is indeed a vital lesson, and one she both teaches and learns.