Jackpot: High Times, High Seas, and the Sting That Launched the War on Drugs 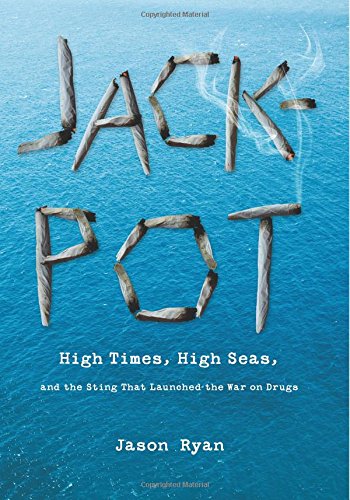 In the late 1970s and early 1980s, a cadre of freewheeling, Southern pot smugglers lived at the crossroads of “Miami Vice” and a Jimmy Buffett song. In less than a decade, these irrepressible adventurers unloaded nearly a billion dollars’ worth of marijuana and hashish through the eastern seaboard’s marshes. Then came their undoing: Operation Jackpot, one of the largest drug investigations ever launched and an opening volley in Ronald Reagan’s War on Drugs.

In Jackpot, author Jason Ryan takes us back to the heady days before drug smuggling was synonymous with deadly gunplay. During this golden age of marijuana trafficking, the country’s most prominent kingpins were a group of wayward and fun-loving Southern gentlemen who forsook college educations to sail drug-laden luxury sailboats across the Mediterranean, the Atlantic, and the Caribbean. Les Riley, Barry Foy, and their comrades eschewed violence as much as they loved pleasure, and it was greed, lust, and disaster at sea that ultimately caught up with them—along with the law.

In a cat-and-mouse game played out in exotic locations across the globe, the smugglers sailed through hurricanes, broke out of jail, and survived encounters with armed militants in Colombia, Grenada, and Lebanon. Jackpot is based on years of research and interviews with imprisoned and recently released smugglers and the law enforcement agents who tracked them down.

They called it Operation Jackpot, but by the time the investigation got rolling, the fugitives had long since cashed in. Now the federal government was playing catch-up, trying to arrest dozens of East Coast kingpins and underlings accused of smuggling close to $1 billion of hashish and marijuana into the United States from 1974 to 1982, nearly all of it packed into the holds of boats.

Mr. Ryan has hit the jackpot with this tale of drug smuggling on the high seas.

From the very first page, right down to the last sentence, Jackpot: High Times, High Seas, and the Sting That Launched the War on Drugs reads like an international thriller rather than the true crime book it actually is. This is due in no small measure to Mr. Ryan’s keen eye as a journalist but also to his extensive research from countless interviews from participants, grand jury and trial transcripts, personal correspondence, news articles, and police reports.

There is also a rare insight into the U.S. system of justice. Each page of the book is chock-a-blocke with hilarious and hair-raising antidotes of fast times—and even faster men and women—always looking over their shoulders, and always one-arm’s length from the long arm of the law.

If this were fiction, it would be terrific. As a factual book, it’s mesmerizing, and as addictive as the drugs in the story.