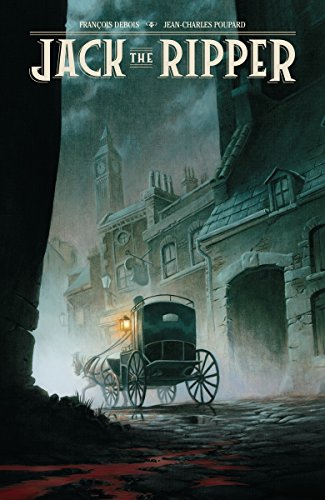 There have been many retellings of the Jack the Ripper legend. From novels to nonfiction books, TV shows to movies, and even more than a few graphic novels. The most well known graphic novel would be Alan Moore’s From Hell. Considered a classic not just as a graphic novel, but as a piece of literary fiction, From Hell was a thick beast of a book that spent a good deal going places that seemed more like epic poetry than a fictional narrative of the famed serial killer.

What Francois Dubois and Jean-Charles Poupard have done in their Jack the Ripper is to weave the known facts of the murders with other historical events of the day, create their own theories and inventive ideas on who Jack was, examine why the murders happened and why no one was ever caught for them, then throw that all in with some good Penny Dreadful style storytelling, making their take very accessible to all readers.

Jack the Ripper follows the exploits of Frederick Abberline, a detective with Scotland Yard assigned to help hunt down the elusive serial killer. Detective Abberline comes from the Whitechapel district, the famed low-rent area of London where the murders occurred. He knows how to deal with the “neighborhood girls” as many of the prostitutes are known while also being able to navigate the sordid politics of the area, especially knowing how to deal with a man named Lusk that heads up the Whitechapel Vigilance Committee, a vigilante mob made up of Lusk’s underworld minions and local residents bent on finding and killing the Ripper no matter who they have to destroy to do it.

Surprisingly, the Ripper is found fairly easily and early in the tale, making it seem like the story is over too soon. This is where Dubois’s inventiveness kicks in and he throws out his fantastic theory about what could have happened back in those late 18th century days.

From the surgeries of London to the universities of Paris, Dubois casts his net wide, creating a deep conspiracy amongst the physicians of the day that were struggling to understand the new breakthroughs in medical and psychological sciences. It has been a widely held theory that the real Jack was medically trained, and Dubois grabs onto this theory, pushing the story to levels of insanity and gruesome horror that the legend deserves.

Jack the Ripper is an excellent graphic novel, with Poupard’s illustrations and page layouts giving the mad tale a structure needed to keep the reader from becoming as unbalanced as many of the characters that inhabit the book. As stated previously, there have been many retellings of good ol’ Jack, some incredible and some B-movie schlock, and Debois and Poupard’s entry into the pantheon of Jack lore should be included among the better of them.

For those fascinated with the unsolved crimes and the lure of Jack the Ripper, this graphic novel is perfect and a recommended addition to what seems to be a perpetual genre of its own.