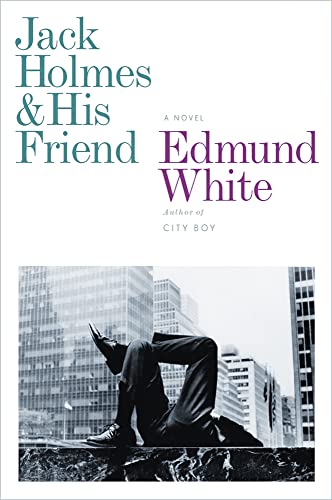 There is no doubt in this reader’s mind that Edmund White, an author who has established a reputation for having a foot in either camp as a leading purveyor of both fiction and “literary non,” has his heart firmly planted in the creation of fiction of the most literate and literary sort.

It is also to be noted that in his long and distinguished career, Edmund White has been an important part in both the development and the evolution of what 20 years ago was called “gay fiction,” that once-important outlaw thing that has, as the issue of gay relationships has to some extent or other been accepted by and absorbed into the general population, been assimilated as well, to the point at which gay fiction today, hopefully, is nothing more than fiction involving characters who happen to be gay.

In his new novel, Jack Holmes & His Friend, Mr. White reveals a deep and characteristic warmth for his characters, as well as an abiding interest in the sexual appetites of his characters that would put many a investigative journalist to shame.

Indeed, in all his fiction, Edmund White never seems quite so engaged with what he is writing as when those that he is writing about are themselves actively exploring their sexual interests, and most especially when those same characters are exploring new options, as many, including Jack Holmes himself, do in White’s latest work. (The surprise here is that Mr. White writes more hubba hubba detailed heterosexual sex scenes than he does homosexual.)

In Jack Holmes, Mr. White subtly and quietly takes us through the eras of his—and our own—sexual evolution, roughly from the mid-1950s through the mid-1980s, a time in which men and women, heterosexuals and homosexuals, all discovered a new sense of self as political, social, and sexual beings through the feminist and gay rights movements. It was a time in which our culture grew from the group adolescence of the mid-century to the exhausted, mature viewpoint of human sexuality and human rights that survived through the evolutionary thinking of the 1960s, the sexual and social exploration of the 1970s, and the battle for health and healing brought on by the AIDS epidemic of the 1980s and beyond, along with the somewhat forced redefinition of relationships, both gay and straight.

The achievement of the book is that Edmund White largely pulls off this timeline of our lifetime and the history of the gay rights movement from the era of the Mattachine Society, through the Stonewall and post-Stonewall moments in our history and beyond, to a time not so very long ago, when death seemed all around and the idea of same sex commitments transforming into legal marriages was just a pipe dream.

That he tells his tale honestly, simply, and with dry eyes, in a work that neither stoops to the political dialectic or the screaming screed stands as a testament to Mr. White’s skill as an author. Most especially because in that all that he reveals to us—about his characters and our own selves as the proscenium of the sexual revolution—is secondary to the core topic about which he is writing here.

The phrase that pays, the central topic, is contained right there in his lovely title: Jack Holmes & His Friend. Because, you see, in its heart, despite myriad details of life and sexual love of the last half century contained in these pages, this is a book about friendship and friends.

Jack Holmes traces a 30-year arc in the life of Jack Holmes; it is the coming-of-age component—in which young Jack arrives in New York City a fresh-faced guy with a newly minted diploma from the University of Michigan and gets his first job after college working in the bowels of the borderline-obscure Northern Review—that is of vital importance. As is this passage, in which, after a few lonely months in the city, Jack concludes:

“Either you were off everyone’s radar and flying solo, undetectable, or you registered with them and suffered the consequences—you became a character a type, which was fine except it felt limiting. What he wanted and needed was a buddy, a guy his own age a masculine guy who didn’t look at you penetratingly and size you up. A buddy who would share with you his interest in books or old movies or fine sports writing. Yeah, you’d catch sight of your buddy out of the corner of your eye as the two of you headed out into the night, collars turned up against the cold and shoulders bumping. Someone who didn’t stare at you and who could watch TV with you and make the occasional wry comment while nursing a beer. Someone who made you feel like a minor adjective, not a major noun.”

That Jack finds his friend in the form of a boy called Will (Note the naming of names and its parallel in the television show “Will and Grace.” Coincidence?), and it is the double strand of DNA that the two come to form that gives the plot it’s throttle.

In the earliest, best part of the novel, Jack, who is only himself discovering the nature of his own true sexuality, spends a great deal of time pondering Will’s wants and needs, as he realizes that his own feelings for his friend have tipped the dessert cart from companionship to love, or, at the very least, lust:

“But Jack did nothing and the moment froze like a smile on a chagrined face. Luckily. Because then Will stretched and sat up and spoke out of his severe Gothic face: “I fell asleep for a moment in spite of that treacly music. How can you listen to that garbage?’”

The is-he-or-isn’t-he, will-he-or-won’t-he stage passes soon enough and the relationship is established and defined. And yet it is the continuing bumping of desires, of needs, and of urges that continues to shape these two friends for decades to come.

Thus, these two intertwined lives become our exemplars in the bobs and weaves, the dips and thrusts of the sexual revolution, each signifying a viewpoint, a sexual vibe, while each remaining a rounded if conflicted, vibrant character.

All this is quite a nifty achievement for our author Edmund White, who writes as Max Steiner composed movie soundtracks, giving his work an underpinning of lush tremolo. This lush nature of his work is so very potent, that it would be easy enough for the reader to be caught up in the tidal nature of his narrative and to drift out to sea.

In other words, it’s not just what he’s writing, it’s the way the man writes it. As here, where Mr. White so exquisitely shows his reader Jack’s continuing sexual confusion:

“Maybe Will’s function was to be unobtainable, to allow Jack a bit of same-sex yearning without the danger of real cock-and-balls encounters. Jack had hated waking up with Peter. And empty bed every morning was Jack’s proof that he hadn’t chosen his sexuality yet, that he was a blank slate.”

Or this bit, a moment describing love and lust:

“The sunlight was hot, and we both stretched and untangled in it in a slow photosynthesis of pleasure and desire.”

Or finally this passage, in which Jack finally reads the novel that Will has been working on for some time, a novel on which they both had pinned their hopes:

“Jack wanted it to be good, the novel, because, as he thought, it emanates from my Will, my cold husband, my enigmatic friend. I need it to be good because Will must be talented, intelligent, to justify my devotion and his mysterious confidence in himself. I want it to be bad because Will has disappointed me and now he must pay.”

In the same way that Jack needs that book of Will’s to be good (and, somewhat perversely, utterly humanly also needs it to be bad and become a source of pain), there are oh, so many readers who will need this work to be good—at the very least good—because it emanates from Edmund White. Edmund White who wrote The Beautiful Room Is Empty. Edmund White who gave us A Boy’s Own Story as well. It is as if he owes it to us to always excel. And we owe it to him to always read, nod, and approve.

And this reader does, he nods and approves. That is, until the very end. Not the very, very end, but the penultimate moment of the book, the last page and a half (involving a visit to a doctor, a slap on the tush, and some ominous information), in which through some sudden, strange need for abbreviation, our author decides quite suddenly that enough is enough and slams shut the lid of his laptop, having tacked on what is perhaps the most abrupt and least satisfactory ending to what has, until this point, been a story that could best be called languorous.

It is as if someone ion the background had called out, “Finish that book right now and we can go for ice cream!” Or something akin to that.

Luckily, at some point after the sundaes had been digested, Mr. White returned to his computer to create an epilogue that, to some extent, satisfies like the story’s actual ending does not. But, oh, had we been allowed to know the details of what happened between the ending and the epilogue, how much more powerful this book might have been.