J. D. Salinger and the Nazis 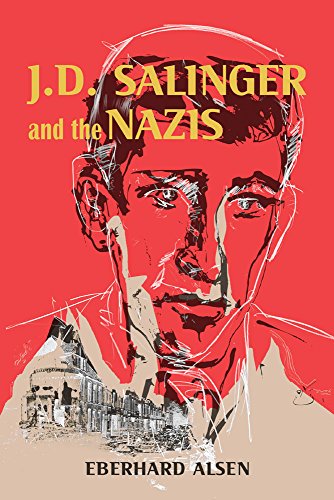 "Alsen uses a conversational style for this concise narrative that enlightens a part of a dark and mysterious literary figure of our time."

That opening represents how this work exposes the complexity and conflicts of Salinger even during his rise as the future author of Catcher in the Rye and as an enigma. This book has everything that Salinger's reputation deserves such as exposing often-published misstatements about Salinger's life.

In the United States Army, Salinger found himself in mortal danger working in the Counter Intelligence Corps. He helped in arresting "Nazi spies and collaborators," as well as later "tracking down Nazis who had gone into hiding."

Salinger did not keep his mouth shut but wrote several stories that reflect events he experienced in the war," however. Alsen argues that this life could and did make good fiction.

J. D. Salinger professed no religion and found his Jewish roots an embarrassment. His attitude about being a Jew likely came from his father "not an observant Jew" whose family celebrated Christmas and who worked as an executive in a ham importing company.

Salinger's Roman Catholic mother pretended to be a convert to keep peace in the family. He likewise only had a bar mitzvah for the same reason. In anti-Semitic pre-World War II America, however, "approximately 80 percent of Jewish youth in New York City were found to have no religious training at all."

"Of the thirty-five stories Salinger published, only two have Jewish themes." Alsen analyses both "Down at the Dinghy" ("the story is all about avoidance") and "A Girl I Knew" (written in a period when Salinger had more interest in "exploring the psyche of the female of the species than in following accounts of the Nazis terrorizing Jews in Austria.")

That the hero in the latter story takes revenge on the Nazis speaks only to Salinger's love of Vienna. Alsen also notes that in Salinger's numerous stories set in World War II he rarely mentioned Europe and the Nazis at all.

Salinger referenced the war with Japan more often "even after it became widely known that the Nazis had begun to systematically murder Jews in mass executions." He only made one passing reference to a concentration camp in his stories, and it was factually incorrect although he had, "entered a recently abandoned concentration camp and saw the dead bodies of hundreds of Jewish prisoners."

Contrary to the title J. D. Salinger and the Nazis, Alsen actually tries to explain why Salinger wrote so little about Hitler. The author writes, "this unconcern about the Nazis can be explained in terms of his intense focus on his career as a writer, the Japanese attack on Pearl Harbor, and his dashed hope to be admitted to officer candidate school."

Of those explanations, "his ambition to become a first-rate writer" appears the most convincing. Salinger always followed his own way, seemingly oblivious to all else. A perennial college failure, he still knew he wanted to write even before he fell in with Whit Burnett and his famed Story magazine, a starting place for many great writers.

When Salinger finally does mention Hitler in a story, he does so to vindicate fighting in the war without glorifying it as defeating the Third Reich. Alsen interprets his subject, who suffered a nervous breakdown at the end of the war, as writing that he "did not believe that fighting Nazi Germany justified the deaths of so many men."

Alsen uses a conversational style for this concise narrative that enlightens a part of a dark and mysterious literary figure of our time. The author speaks in the familiar with informal slang like "WASP" and phrases such as "here is what happens." This style makes this short book an even faster read and also colorful.

J. D. Salinger and the Nazis has annotation and a bibliography. Brief but interested background snippets turn up from time to time such as explanations of Austrian Fascism in the 1930s, the landing at Utah Beach, and foxholes, part of Alsen’s discoveries made while working on a documentary about Salinger.