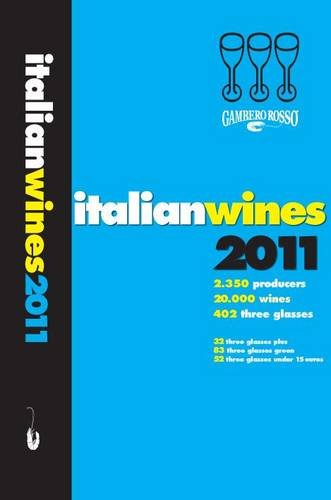 There are some books that one needs to buy the new edition of every year. The Gambero Rosso Italian Wines series is one of those sets. The newly released 2011 edition is bigger than ever and remains the indispensible guide to Italian wines.

The task every year is gargantuan. A group of more than 70 tasters fans out through Italy, mostly working with local wine associations, tasting almost 25,000 new releases. These are rated by quality of one glass, two glasses, or two red glasses (that is, potentially three glasses).

Thus in one book, albeit one book weighing in at nearly a thousand pages, one can get the ratings of around 20,000 Italian wines, not rated with the artificial precision of a 100-point scale, but with an essentially one-to-three scale.

The format of the 2011 edition follows previous editions, in having two major producers (not necessarily large producers, but producers having a large number of rated wines) per page for each wine region (which is not alphabetical but geographical—each region begins with a small map if one is unclear where in Italy Liguria is, for instance). “Other wineries” are crammed into six per page. For each winery, the address, phone number, and website are listed.

For the major wineries, the 2011 edition follows the 2010 edition in including an indication of whether the winery offers cellar sales, pre-booked visits, rooms, and food. For Americans used to just driving up to wineries in the United States, it is useful to know that if an Italian winery is to have visitors at all, they require reservations in advance, and they may still say no. (This reviewer once had to ask a U.S. rep for a particular winery to get us a visit after a friend making reservations from Rome was turned down.) This information is not included for the “other wineries,” but their websites may provide those details.

This information makes the book an essential tool for anyone planning a serious trip though Italian wine country.

The standard format for each of the major wineries consists of a paragraph containing some generally complimentary remarks about the winery and its family, followed by tasting notes for a number of the wines. A typical example is for Poderi Marcarini in Piedmont:

“You do not become one of the standard bearers of Langhe tradition by accident. Luisa Marcarini and Manuel Marchetti know this well, heirs to a glorious history handed down through a series of extraordinary mainly nebbiolo-based wines. The Barolos bear the names of two magnificent La Morra Vineyards, Brunate and La Serra, and show their origins from their star-bright hue. Long macerations and patient ageing in 20 to 40-hectolitre oak impart a sense of terroir to these phenomenally cellarable wines.

“A bright, pale garnet-ruby, breezy whiffs of tobacco, liquorice and rose petals, and a palate that is sharp-edged yet velvety, earthy and aristocratic describe a great classic Nebbiolo. This successful Barolo Brunate ’06 has everything except perhaps that extra structure and depth. The same vintage Barolo La Serra has a slightly more developed style, giving tobacco, spice, dried flowers and root vegetables on the textbook nose but the long finish turns a bit bitterish, in part because of slightly emphatic acidity.”

The rated wines are then listed with the number of glasses, and a code of 1 through 8 to indicate average prices in wine stores, with an asterisk for particularly good values. The price bands are generally rather narrow, but category 8 starts at 40 Euros and up, so one is not sure whether a particular category 8 wine will cost us $55 or $550.

Wines from previous vintages that are of note and still drinking well are also often included.

So are the ratings and descriptions a reliable guide to how much you are going to like a particular wine? The answer for any rating of wine, whether by Robert Parker, Wine Spectator, or Gambero Rosso is always maybe, maybe not.

For one thing, the evaluators for this guide are quite eclectic. If the wine is very good for the kind of wine it is, it will be highly rated. If, say, Gewürztraminer is just not your thing, you may not like the Elena Walch Gewürztraminer Kastelaz from the Alto Adige region, even though it was rated Three Plus Glasses. But on the other hand, if you are not sure whether Gewürztraminer is your thing, the Elena Walch is a good bet for one to try if you are feeling adventurous. (As an aside here, it is sometimes difficult to figure out the rationale for which part of a name should be alphabetized in the listing of wineries at the back of the book. The winery Elena Walch is found under the “E’s” while the winery Wilhelm Walch is listed under the “W’s” as Walch, Wilhelm.)

Furthermore, individual preferences for something as subjective as wine vary tremendously. One person’s Three Glasses is bound to be someone else’s One Glass wine. Also, written descriptions of a wine vary so tremendously that it is hard to see how different writers are describing the same wine. For example, here are this reviewer’s notes on the two 2006 Marcarini Barolos quoted above, tasted at the winery last May:

Gambero Rosso gives both of these wines two red glasses (that is, evaluated for three glasses by the Three Glasses Panel, but not awarded three glasses), which seems right for the La Serra, but this reviewer would have given the Brunate three glasses.

In any event, even if written descriptions include aromas and flavors that you find in a wine as well, it is not necessarily a good indicator of whether you will actually like a wine.

But on the whole, the Gambero Rosso ratings are a good indicator of the general quality of the wines rated. Given the huge array of choices of Italian wines available, even in the United States, it is a good way to narrow one’s search. But even so, don’t avoid the Two Glasses wines (or even the One Glass wines), which may work very well with what you are having for dinner.