Is It All in Your Head?: True Stories of Imaginary Illness 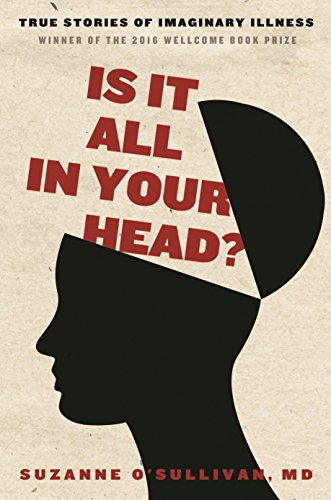 As early as Hippocrates (c. 460 BCE–c. 370 CE), flummox and fascination have propelled the quest to understand the relationship between mind and body. The intimate relationship between the two, noticeable even through self-observation—blushing upon embarrassment, heart palpations when nervous or excited, sweaty palms when anxious—has vexed scientists, doctors, and philosophers alike. None have offered an easy answer.

In Is it All in Your Head?: True Stories of Imaginary Illness neurologist Suzanne O’Sullivan steps into the shoes of Hippocrates, Charcot, Freud, and Breuer, boldly exploring the mind-body connection in its most vivid and arduous of example: via psychosomatic disorders—arduous, because understanding how the mind can cause such debilitating neurological symptoms as blindness and paralysis is a delicate topic. O’ Sullivan shows us just how fragile an area this is through vivid accounts with some of her patients.

Her book seamlessly blends case studies with the evolution of medical history in the understanding of psychosomatic disorders, along with her sensibility in the modern treatment of this type of illness. She explains, importantly, that illness and disease are not the same. Disease is the malevolent and organic changes to an infected body; whereas illness is a person’s response and attitude toward these changes. A person’s difficulty with acceptance and attitude when hearing their symptoms have an emotional cause is something O’ Sullivan repeatedly explicates throughout her patient narratives.

O’Sullivan’s case studies are written with the delicacy one would expect from a doctor writing about her patients, but also with the vividness of a novelist. Readers will feel the tension and turmoil that O’Sullivan feels as she navigates from admission, to examination and testing, to having to explain to patients that the cause of their symptoms is emotional.

Psychosomatic disorders (conversion disorder is the term used when emotional distress causes neurological symptoms), happen when people are unable to put words to extremely difficult emotional experiences. Emotionally vexed and unable to explore through language their feeling states, physical manifestations become the only way to discharge the internal tension. People suffering from extreme psychosomatic symptoms aren’t aware of the traumas and distress that lurk deep in their psyche, wrecking havoc throughout their body.

Let’s take for example a patient named Yvonne, who develops blindness as a result of issues at home with her family, her husband in particular. Yvonne, readers will learn, is unable to express her needs and wants. Her needs and feelings are repressed: She doesn’t even experience them consciously but still, they are there beneath the surface. And as a result the blindness happens. It is as compelling as it is disturbing to read her story, seeing the power the mind can have over the body without someone even knowing it.

An important aspect that’s conveyed through the use of her case narratives: O’Sullivan’s patients often have a hard time accepting that their symptoms are caused by mental distress. Although her presentation to them is filled with compassion, the patients hear that somehow they have control over the symptoms, that it’s in some way their fault. Because of this, O’Sullivan’s diagnostic explanation is often not well received. Even as O’Sullivan reiterates that it isn’t their fault over and over, patients often still hear: It’s all in your head.

Compelling for readers is evidence shown on functional MRIs in certain instances. She explains that for some psychosomatic symptoms, radiology reports show different brain imaging than for someone who’s faking a symptom. They also look different from someone whose symptoms have an organic condition, such as epilepsy. This is fascinating and lends credence to the idea that emotional distress can cause changes in the body, furthering evidence of the profound interrelationship between mind and body. Equally important is helping people who are suffering such grave distress to learn how to talk about it.

O’Sullivan shows that this isn’t always easy; in fact she often has a hard time convincing patients and family members to seek the psychiatric help she recommends. On more than a few occasions she is met with resistance, angry letters, even threats of lawsuits. And O’Sullivan exposes to readers her dilemma: Most of the time she has absolutely no medical proof to show her patients that the cause is emotional.

Patients who are paralyzed, seizure-ridden, blind, suffering with chronic pain—they all want proof of cause for their ailments. And who could blame them? O’Sullivan doesn’t. She empathizes. She herself articulates frustration that she doesn’t have more concrete proof to show patients. Her experience, intuition, and exhaustive exclusion of all organic causes isn’t enough much of the time.

Her seamless blend of history, real life stories, and personal experiences makes for an interesting and thought-provoking read. One mildly disappointing caveat for readers, as well O’Sullivan herself, is that for many of the patients the story is left unfinished. As she is left to dwell in her imagination, hoping that once resistant patients eventually concede to psychiatric help, the question of what happens to them is left open for readers as well. And the question of if psychiatric treatment would in fact help these patients resolve internal distress ultimately relieving physical symptoms is left unanswered in more than a few case stories.

Still, this book is an important contribution to the field of neurology and psychiatry/psychology, bringing readers one step closer to understanding the powerful relationship between mind and body. O’Sullivan’s courageous telling of a difficult diagnosis brings awareness, hopefully breaking down stigmas and misunderstandings concerning psychosomatic disorders, showing people that although a symptom’s origin may be emotional, it is very real, and therefore not all in your head.

Jacqueline Simon Gunn is a clinical psychologist in New York, a freelance writer and published author.