Issei Baseball: The Story of the First Japanese American Ballplayers 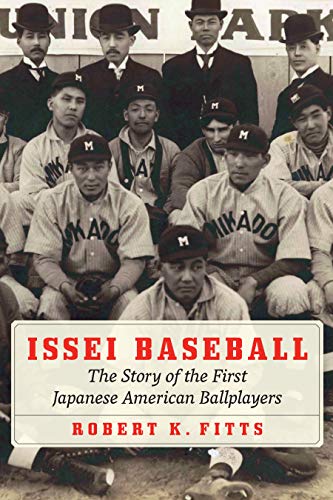 “Robert Fitts has made another important contribution to Japanese American history and to the role of baseball in that story, as well as to the history of the United States.”

Over the past 15 years, Robert Fitts has established himself as a leading historian of Japanese American baseball and baseball’s link to Japan. Most notably in this regard are Mashi: The Unfulfilled Baseball Dreams of Masanori Murakami and, the award winning, Banzai Babe Ruth, the story of the Ruth led major league baseball tour of Japan in 1934. Issei Baseball, Fitts’ fifth book, firmly establishes his status.

At the center of this historical narrative are five Japanese Americans who formed and shaped Japanese American baseball. They are Harry Saisho, Ken Kitsuse, Tom Uyeda, Tozan Masko, and Kiichi Suzuki. Their passion and love for, dedication to, and belief in baseball drives this remarkable story.

All were born in Japan and received a Western education as their fathers wanted them to be prepared for leadership roles in the new Japan. In this process many were introduced to baseball and developed a passion for the game. All immigrated to the United States and found themselves in a place that did not welcome them.

All five became involved with baseball in their new American communities, primarily on the West Coast in urban enclaves such as Oakland, Seattle, Los Angeles, and other smaller communities. Tozan Mosko ventured further inland to Denver where he edited the first Japanese language newspaper in that city. Each of the five were involved in organizing and playing baseball, and, as their teams grew, they looked for competition beyond their communities.

Fitts examines in some detail the growth of a number of teams, the progression of the quality of play, and the development of the levels of competition including leagues. Japanese American teams were anxious to demonstrate their skills to the wider American baseball public and saw baseball as a means to move deeper into the society, hoping for acceptance while overcoming the prejudices faced in America.

These overseas tours and exchanges are treated in considerable detail by Fitts, but the major focus is on the tours by Japanese American teams into the heartland of the Midwest. Here they found some prejudice and racism, skepticism about the baseball talents of the Japanese, and they were dogged by considerable economic difficulties on the road. Nor does Fitts’ ignore the larger national and international context of the times, including the Russo-Japanese War of 1905, the move to segregate Japanese American children by the San Francisco Board of Education in 1906, and the fears of the Yellow Peril in American mainstream culture.

This is a work of great value to the specialists in American history and baseball history. The breadth and depth of the research is most impressive. For the general reader and the non-specialist, Issei Baseball could prove difficult. The amount of detail, including individual game stories and a significant number of tangents, could prove overwhelming.

Nonetheless, Robert Fitts has made another important contribution to Japanese American history and to the role of baseball in that story, as well as to the history of the United States.