Israel: A Simple Guide to the Most Misunderstood Country on Earth 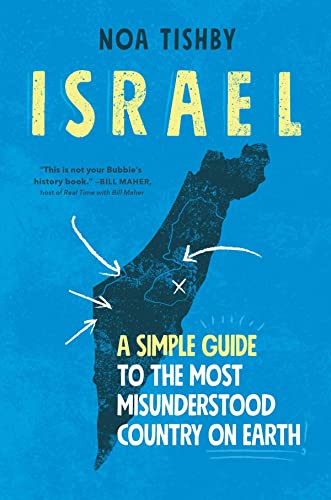 “Tishby tells her small country’s enormous story with wit and passion. Israel shouldn’t be the only book a reader opens about the Middle East, but it’s an excellent place to start.”

Saying “Israel” or “Palestine” or “Arab-Israeli conflict” at a social gathering is the spark that all-too-often ignites a rhetorical firestorm watched by no few head scratching bystanders. Noa Tishby’s Israel: A Simple Guide to the Most Misunderstood Country on Earth is for those who are perplexed, but more importantly, those who think they know all about Israel but have a lot to learn.

An Israeli actor who moved to the United States, Tishby brings a sabra’s bluntness in refuting the common claims she hears about Israel, such as it being a colonialist state (“absurd, as it is a refuge state that was decolonized from British rule”) or an apartheid nation (“also absurd when you know that the third largest political party in Israel is an Arab party.”)

So what is Israel? Not just the region’s only “uninterrupted democracy” since its founding 73 years ago, but “the only country in the Middle East in which you can practice any religion you want freely while making out with your same-sex partner on the beach.”

Clearly, Israel is not a detailed, scholarly account but rather a book for popular audiences by an Israeli who understands how Americans think and speak. (Do we really curse that much?) Tishby’s roots as an Israeli run deep from a grandmother who fled Europe’s anti-Semitic violence in the early 1900s to join a kibbutz (communal villages that merged Marxist economics with free love) to the grandfather who helped forge Israel’s early ties with African nations.

Israel’s story is her story, giving Tishby the gravitas to say: “What is Zionism? It’s pretty simple, actually. Zionism is about the Jews, like any other nation, being allowed to self-govern in their tiny piece of ancestral land. Zionism is a merging of liberal values and cultural Jewishness, in simple words: it is a national liberation movement. Zionism was never about having an exclusively Jewish state.”

Tishby gives the history everyone should know but few do from the existence of a Jewish nation in roughly 1000 BCE, to the Roman Empire’s siege of Jerusalem that led to exile, to the many rulers the region has seen (the Byzantines, the Muslim Caliphate, the Mamluks, to name a few), to the collapse of the Ottoman Empire after World War I when the region passed to British and French control, to the Palestinian refusal of the U.N.’s offer of an independent nation in 1948 and the resulting wars since then, and on to the emergence of contemporary Israel, a multi-ethnic, multi-religious, scientific, military, and economic powerhouse.

Tishby may be idealistic, but she’s not naïve. She wades into controversial waters from the BDS (Boycotts, Divestments, Sanctions) movement’s overlapping connections with organizations that supported Hamas, to the growing clout of Israel’s Charedi (ultra-Orthodox) political parties, to the conflicts between Israel’s Ashkenazi and Mizrahi Jewish communities, to the status and challenges faced by Israel’s diverse Arab citizenry, and much more.

Tishby tells her small country’s enormous story with wit and passion. Israel shouldn’t be the only book a reader opens about the Middle East, but it’s an excellent place to start.