Island of the White Rose: A Novel 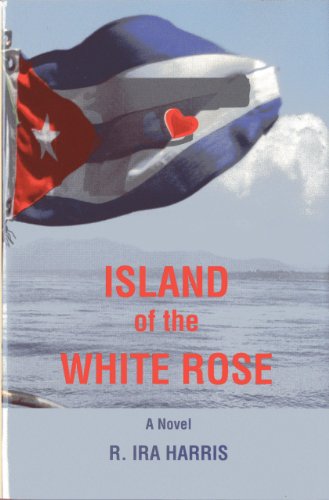 Cuba of the late 1950s was a land of two worlds: that of Batista’s corruption and of Castro’s revolution.

It is here we meet Pedro Villanueva, the youngest son of an upper crust Havana family, a member of an exclusive yacht club, an accomplished sailor, and the priest of small and underperforming church. It is at the yacht club we meet Father Villanueva and his family and are introduced to his crisis of faith.

Author R. Ira Harris does a fine job at creating the sets of complex dilemmas with which this man of God must deal as the world about him changes, and he is forced initially to do nothing by his family and by his church. A world in which Fidel and Raúl Castro’s revolution in the eastern mountains of Cuba had gained momentum and Fulgencio Batista y Zaldívar’s dictatorship was at its most brutal. We are witness to the fall of the Batista regime and the rise of Fidel’s 26 of July Movement, Movimiento 26 de Julio; M-26-7. Historically, these were the facts of life in Cuba.

Our hero’s overwhelming need to do something, anything, to help the people of Cuba during this time of crisis is well told. His conflict is further enhanced with the church’s “hands off anything political” fence that prevents the Father from growing beyond the walls of his small parsonage.

For Father Pedro Villanueva, the crisis of faith becomes further entangled with the enchantment of two revolutionaries—the beautiful and disillusioned government employee Maria Guerra, and the cunning and somewhat heartless revolutionary leader Dolores Barré. He is smitten by the love of the first and taken by the power of the second. Initially, Pedro, like many Cubans of the day, bought into the revolution’s promises 100 percent.

As Pedro embraces the cause, first with medical supplies and then running guns and ammunition, he is filled is filled with hope and importance with his belief he is really doing something good. He befriends the Castros and other leaders of M-26-7. He also feels the sin of killing one human to save the life of another and the sin of recruiting his older brother, an attorney, who would later die bringing justice and freedom to a wrongfully imprisoned boy.

It is Father Villanueva’s witnessing the brutality of Batista’s, and then Castro’s La Cabana prison, the beatings, the firing squads and the blood stained walls that heightens the conflicts once Pedro discovers that everything has changed but all stayed the same. Or gotten worse.

The reader is intimately introduced to Cuba in crisis. Through the Villanueva family we find support for both sides of the revolution, the involuntary but necessary involvement of the families whose lives will be forever changed as the revolution overthrows one dictator for another. We watch the national crisis of hopes and dreams dwindle in the realization of one evil replacing another.

Mr. Harris does an excellent job of maintaining the historic events of the Cuban revolution, introducing the right characters, locales, and political environment. We are brought into the Cuba’s Sierra Maestra mountains, fight the battles, and watch as this priest is brought further into the inner sanctum of Castro’s circle. We watch as expectations and promises never materialize and the inner conflicts of this one man become overwhelming.

Mr. Harris’ work needs a bit of polish, but that does not diminish the story, the characters, or the history of Cuba. My own Cuban exile friends in Miami would appreciate the color and memories created on each page; but they would also want more.

Though true to Cuba’s history, something is missing: the details of the politics and personalities of all the main and secondary characters, the revolutionaries and the families of this story.

The personality of the Cuban revolution is an important aspect seemingly missing—the history of "Che" Guevara, the true Marxist of the revolutionary leaders, to the metamorphosis of the Castros from wanting American support to becoming America’s arch-enemy in the western hemisphere—such that the reader may know the history, but . . . it all belongs in the book to get an accurate picture of the whole.

The fulcrum of the story is the family 40-foot sloop, The White Rose, La Rosa Blanca. It is on this island of solitude where Pedro finds serenity and peace, involvement in and eventual escape from the revolution. It is also where his multiple crises of faith come to a head.

It is a shame that we do not learn more about the serenity of single mast sailboat, a reference to her anthropomorphic being, a deeper description of Pedro to her physical being, her emotional connections—and the connections to his crises of faith.

The inclusion of these stories—the fillers of history and personality—would have improved the flow and given a deeper meaning to the story.

This was a fun read, a classic style of fiction that keeps the reader immersed in its pages. I look forward to Mr. Harris’s next novel, to see his work more polished and shining. The Island of the White Rose may be a bit rough, but it hides a diamond within.