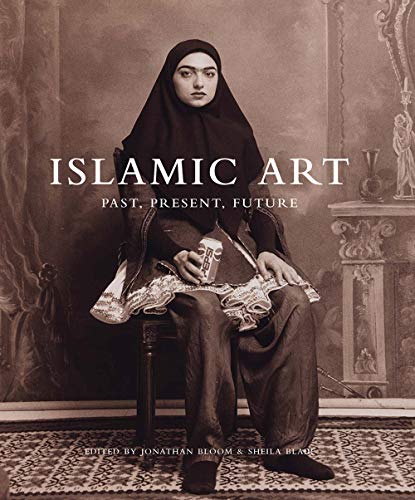 “succeeds in providing documentation for how thinking is changing, debating, and making ideological accommodations over time, as understandings deepen, and relationships are strengthened.”

Sparking constructive dialogue and tackling elusive definitions, Islamic Art: Past, Present, Future is so entirely necessary for expanding our exposure to an important cultural and spiritual heritage. As both a global undertaking and an intimately personal soul search, to understand this book, it is perhaps worthwhile to take a step back.

In 2005, the first of seven conferences to draw together scholars and artists to present aspects of Islamic visual art meant to create bonds between the Arab world and the West was launched. Shared between the Virginia Commonwealth University in Richmond, VA and the State of Qatar—Qatar Foundation, this first Biennial Hamad Bin Khalifa Symposium on Islamic Art, as the conferences are referred to, was titled Expanded Frontiers. Each presenter reflected on topics meant to shed light on the place of Islamic art within the arts of Christian Europe.

For the fourth reunion in 2011, the theme was God Is Beautiful and Loves Beauty: The Object in Islamic Art and Culture. From as diverse speakers as possible, ancient Qur’an manuscripts were discussed as well as the consecration of the new Museum of Islamic Art in Doha, Qatar, designed by I. M. Pei. This was followed in 2013 with God is Light of the Heavens and the Earth: Light in Islamic Art and Culture for the fifth symposium, which also contained a wide range of topics from light in the Qur’an to the practical role of light in art and architecture.

Two years later (2015) the meeting centered around the theme, By the Pen and What They Write: Writing in Islamic Art and Culture, covering the role of writing from its origins on stone to contemporary pieces in neon art. Each symposium subsequently produced a book that would preserve the ideas and concepts addressed.

Which brings us to 2017, which was the most recent (and the seventh) symposium and is the title of this current volume, Islamic Art: Past, Present, Future. After touching on water, color, objects, light, and writing, the discussion of the current symposium bends slightly to a more elusive ideology behind Islamic art.

“Islamic art was generally taken to encompass the arts made in the region from Spain to India between the seventh century and the eighteenth of the Common Era . . . it did not have to be made by or even for Muslims, and nor did it have to be made for religious purposes.” Furthermore, Islamic art does not even have to reside in this geographic region or have been created during this time in history.

Blurring the definition beyond recognition, if Islamic art is not necessarily the art of the Islam faith, nor the art of a geographic regions, then, what, precisely, is Islamic art? The Islamic art of the past is being challenged by the artists of the present who are endeavoring to weave together an Islamic art for the future, an incredibly progressive position to take.

The presenters of this symposium each had their own take on what was happening in the Islamic art world. This book is a collection of their speeches with stunning images accompanying the text, emphasizing their points. By publishing the transcripts of each symposium, Yale University Press is recording and cataloging a fascinating point in art history.

And although the Introduction clearly states that this was the seventh and final symposium, there appears to be an 8th Biennial in the fall of 2019: The Seas and the Mobility of Islamic Art, which will hopefully contribute even more to the ongoing dialogue of global artistic and cultural understanding of this mysterious Islamic world.

This entire ambitions project, from its roots in 2005 (actually even farther back to the origin of an art school partnership in 1997) to the current Islamic Art: Past, Present, Future is incredibly valuable. It succeeds in providing documentation for how thinking is changing, debating, and making ideological accommodations over time, as understandings deepen, and relationships are strengthened.