Islam, Race, and Pluralism in the Pakistani Diaspora (Studies in Migration and Diaspora) 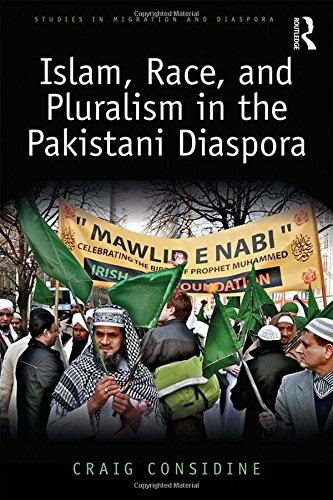 ". . . bound to be a starting point for further research into minority groups in the U.S. and abroad."

As a Pakistani American, first-generation immigrant raising American-born children in the United States, I consumed Considine’s new research about Pakistanis in the diaspora with a great deal of interest. Questions about identity, religious affiliation, and citizenship are foremost in the minds of most Pakistanis who have made America home, and these questions only get more challenging as roots are laid down in a new culture. Considine attempts to answer some of those questions through rigorous research and data.

The study for this project took place in two cities: Boston, MA, and Dublin, Ireland. Using interview techniques, Considine journeyed toward a better understanding the many facets of life of the participants:  young men aged 18–35 years. His aim was simple: “I interpret the mainstream discourses around Pakistan, Pakistanis and Islam, along with the protectors of these discourses, as further examples of the cause and effect of centuries-old biases towards Others and their cultures.”

Considine begins the book by explaining the stereotyping and racial profiling that Pakistanis in America generally undergo as a result of this othering in general and terrorism-related incidents in particular. Similar is the case of Pakistani immigrants in Ireland who are viewed with suspicion. He also explains the history of South Asians in the western world, helping readers accept the idea that Pakistanis and other immigrant groups are not newcomers but rather a part of the fabric of society for decades.

Using political rhetoric as well as academic literature, Considine points to the fact that closing the door to minorities in times of political stress, “has led some Pakistanis to feel like national outsiders, or worse, enemies of the nation. Even Pakistanis who were born and bred and raised in the United States have shared the view that they grow up as strangers in their own country, forever seen as an alien containment within the true blood of the nation-state.”

Through the interviews he conducted, Considine sheds light on many aspects of religious and cultural identity. One of these is the 9/11 narrative, which he explains as depicting Muslims through the lens of violence and terrorism. Another is religion: Christianity in the United States and Catholicism in Ireland perceived as opposing or offering double standards to the practice of Islam in those countries.

A moving explanation of the religious challenges faced by Muslims in both countries is provided through the participants’ own words of religious discrimination, having to hide their religious identity and even religious profiling at airports and in the workplace.

Perhaps the most interesting result of Considine’s research is the realization that Pakistani men in the diaspora have claimed a hybrid identity that veers away from strictly traditional Pakistani culture, yet is also not truly American in the way that white, Christian Americans may be familiar with.

For participants who were second generation, this held doubly true: there were aspects of both cultures—language, habits, even faith—that blended together to form a unique cultural identity. This included both men who were devout Muslims, as well as those who were atheists or agnostics: they held on to some aspects of Pakistani culture while rejecting others, and the same occurred for American traditions as well.

“The participants in this chapter tend to define themselves in hybrid ways, namely as individuals rather than as Pakistanis belonging to a specific ethnic community. The views of the men documented here create a cultural belonging that works for them, they have adopted and adapted to new environments, finding freedom in hyphenated identities as well as liquid identities.”

In between all the data, there is a goldmine of individual stories. Considine has done an excellent job of allowing Pakistani men of the diaspora to talk about their fears and obstacles, and share their dreams of building a new life outside their homeland.

One participant talks about bar hopping with friends, another discusses his reluctance for an arranged marriage. Many participants talk about the racial profiling and othering they have faced in their every days lives from their fellow countrymen. But all seem happy to be in their adopted homelands, because they see it as an opportunity for personal freedom, economic growth and also religious and spiritual benefit.

This book will benefit those who seek understanding of not only Pakistanis in a western setting, but all Muslim groups in such settings. Easy to read for both academic and lay audiences, it is bound to be a starting point for further research into minority groups in the U.S. and abroad.