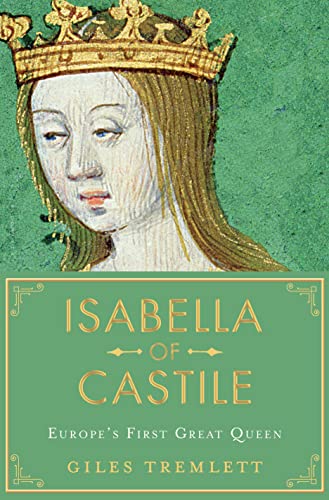 “Tremlett writes so well as to make this read almost as entertaining as a traditional Spanish novel but with thorough balanced scholarship.”

Isabella, founder of the nation of Spain and the Spanish Empire as well as the patron of Christopher Columbus, was one in a line of the greatest era of powerful women who ever lived. Over just a few centuries, the world also saw Eleanor of Aquitaine, Elizabeth I, Catherine the Great, and Maria Theresa, among others.

Isabella of Castile represents this new world better than anyone else. The Spanish as a "people" are among the most anywhere, but nowhere as much as in Castile when Isabella came to rule at age 24 in 1474. As Giles Tremlett, author of Isabella of Castile writes, it had "the violence of mobs, the greed of the grandees, and the casual cruelty of those who rode roughshod over Castile's laws."

Isabella's father and half-brother had made matters worse with over 70 years of rule by surrogate. Castile was at the same time threatened by invasion from Christian and Muslim states. Portugal and Islam were on the rise to build great empires.

A shrewd politician and capable of administrator, the Queen of Castile had to initially fight for her throne as a usurper in the midst of civil war and invasion. She won and went on to finish the six centuries of the Christian Reconquista of Spain from Muslim rule.

Those accomplishments would have been monumental for anyone. Tremlett also describes how she reversed Christianity's decline, united the largest European nation of her time, financed the discovery of the New World, and started the Spanish Empire, one of the most extensive in history.

Despite the reputation of the Spanish Inquisition and the persecutions of Jews and Muslims, members of the Holy Roman Church still seek Isabella's canonization as a saint. She waged war against the corruption that often drove away the faithful.

These accomplishments came decisively from the queen's force of will but also her "attributing to herself the right to mete out violent justice." Her subjects feared as much as respected her, the author writes, "and yet many people were grateful, for that same single-minded severity brought stability and security."

"A woman of intense and stubborn convictions," she was "her own woman, confident in her beliefs and decision making." Isabella was even a warrior who led armies and conducted sieges despite professing herself as only a weak woman and was often pregnant with Europe's future royalty.

The Spanish Queen's legacy suited her well for being not only a Spanish monarch but a European. Her mother was Portuguese and her grandmother English royalty.

Isabella was also a master of spin about her achievements that have survived from her time to the present. With an "elevated idea of her place in history and a desire for lasting fame," as Tremlett writes, no one accused her of being only in the right place and time.

"She made sure that others knew their place was below her—not just figuratively but literally," the author writes. Isabella first became a queen by marriage to her cousin Ferdinand II of Aragon, king of Sicily.

As monarch of Castile, however, this independent monarch created a true and almost unique partnership with her husband "which rested not just on trust and intimacy but also on mutual respect for their abilities." Their shared their accomplishments includes the first true nation of Spain and so much beyond what they could have imagined.

Biographies like this one are frequently boring, dry, mind numbingly complicated, and too alien for the average reader. Tremlett writes so well as to make this read almost as entertaining as a traditional Spanish novel but with thorough balanced scholarship.

Much of the book as a good read is the author's colorful and enlightening narrative of the amazing individuals of that age such as the Borgia Pope, Columbus, and Torquemada. This work might have better educated the readers more on the complexities of Spain but then that would have taken a much larger book to be intelligible.