The Irony of Modern Catholic History: How the Church Rediscovered Itself and Challenged the Modern World to Reform 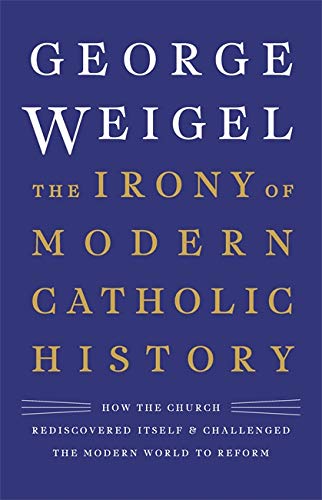 “George Weigel is the most interesting and authoritative American scholar and analyst of the Roman Catholic Church.”

George Weigel is the most interesting and authoritative American scholar and analyst of the Roman Catholic Church. He is the author of a widely acclaimed two-volume biography of Pope John Paul II, and writes a regular internationally syndicated column entitled “The Catholic Difference.” His new book The Irony of Modern Catholic History is a historically based account of how the Catholic Church has reacted and responded to modernity since the mid-19th century.

Weigel’s book is intended to refute the common notion that Catholicism has resisted modernity consistently and mostly ineffectively and has suffered as a consequence of its stubborn refusal to “change with the times.” The truth, Weigel shows, is much more complicated than that.

His definition of modernity is lengthy, but important: “societies characterized by the decline of aristocratic authority based on inherited power and land-based wealth; the desacralization of power by the sharp differentiation of religious and political authority and the dominance of the latter in public life; industrialization, urbanization, and mass education; social mobility; popular participation in government; the rationalization and bureaucratization of virtually every aspect of life; great improvements in nutrition and medicine with a concomitant rise in life expectancy; and a vast expansion of the leisure time available to everyone.”

He identifies the Catholic Church as “the teaching authority of Catholicism as embodied in the Bishop of Rome as universal pastor of the Church” and when the bishops of the Church gather in “ecumenical council” under the Pope’s authority.

He presents what he calls the “drama” of Catholicism and modernity in five “acts,” as if describing a Shakespearean play. The background for this drama is the European Enlightenment and the French Revolution, which began the process of secularizing Europe—the birthplace of Roman Catholicism. During this time period, Weigel writes, “atheistic humanism emerged to dismiss the God of the Bible as a tyrannical shackler of human freedom and a severe obstacle to humanity’s maturation.”

The revolutionists in France seized Church property, deported priests still loyal to Rome, and later massacred more than 300 priests and three bishops. When Napoleon came to power he reached a “Concordat” with the Church, but later imprisoned the Pope and annexed the Papal States.

To be sure, the Church brought some of this opprobrium on itself by what Weigel calls “clerical decadence and corruption” and its coziness with those in power in the “old regimes” of Europe.

The Congress of Vienna restored most of the Papal States to the Pope, and Pius VII “sought to rebuild the Church in those parts of Europe shattered by revolutionary upheaval and the Napoleonic Wars.” In 1830, Gregory XVI was elected Pope and issued two encyclicals that, in Weigel’s words, “set the foundation for the full-throated Catholic rejection of modernity in all its forms . . .”

Weigel notes, however, that gradually within the Church there appeared three separate approaches to modernity: rejection, accommodation, and conversion (these are my terms, not Weigel’s). The rejectionists resisted any efforts to reform the Church in accordance with modern tastes. The accommodationists sought to move the Church toward acceptance of modernity in all its forms. The conversionists sought to use the traditional teaching of Catholicism to dialogue with, shape, and convert modernity.

He also places the Church’s debates and decisions within their proper historical context. The Church, after all, though it claims divine inspiration, is a human institution with all of the flaws of human nature, and that operates within a specific time and place. The Church is not immune to worldly influences—indeed throughout its history it has often been too worldly.

It was the still contentiously debated Second Vatican Council, convened by John XXIII in 1962 and completed by Paul VI in 1965, that fully engaged—some would say embraced—modernity. Weigel believes that Vatican II misread modernity; that is, it misread the post-modern world that was emerging in the 1960s.

Vatican II, he writes, failed to envision a radical feminism and sexual revolution that changed the meaning of “marriage” and “family.” It failed to appreciate the extent of the “new gnosticism” that emphasized the “plasticity of human nature.” It did not anticipate the “radical secularism” that would attempt (and still attempts) to banish religion from the public square. It failed to envision the technological trends leading to globalization. Most important for the Church, it focused on the supposed threat of atheism, when the real threat to the Church was (and is) what Weigel calls “indifferentism.”

Weigel believes that the failures of Vatican II were subsequently recognized by Karol Wojtyla and Joseph Ratzinger, who became respectively Popes John Paul II and Benedict XVI. Both men actively participated in Vatican II and believed that the Church had to engage modernity. Both men, however, were also traditionalists who believed that the Church’s mission was evangelization—to wage a public cultural debate with modernity; to combat moral relativism; to “convert the twenty-first century world to Christ.”

This, Weigel describes, as a “grand strategic change” for the Church—“from ecclesiastical institutional maintenance to robust evangelism and critical civic engagement.” John Paul II and Benedict XVI sought to remind modernity that “there is more to freedom than the mantra of ‘choice,’ just as there is more to the human person than a cluster of desires.”

Weigel is critical of Pope Francis for going beyond the engagement of modernity practiced by John Paul II and Benedict XVI and embracing aspects of modernity that contradict traditional Church teachings.

In the book’s final chapter, Weigel confronts the Church’s ongoing abuse scandal. Both the clerical abuse of young children (mostly boys) and the attempted cover-up of the abuse by Church leaders constitutes, in Weigel’s words, “the most lethal” assault on the Church because unlike past intellectual and political assaults from outside, this is a “self-inflicted wound.”

The abuse crisis, he writes, is a “crisis of fidelity, in which the wickedness of those assumed to be among the Church’s leaders betrayed and trampled upon the truths the Church was privileged to bear as a gift from its Lord.” Weigel criticizes Pope Francis for failing to adequately address the “breakdown in clerical discipline” and the “major defaults in episcopal leadership,” but the abuse and its cover-up predates this Pope.

Weigel is right to see in the abuse crisis a “devastating instance of the sexual revolution’s impact on Catholic fidelity and discipline.” He is also right that the “failure to recognize and address it was the Church’s failure, not the culture’s . . .”

The Catholic Church has a tradition of teaching the world important truths about the inherent value of all human life, the dignity of the individual, and the responsibility to contribute to the common good and well-being of society. That teaching is arguably more necessary than ever today when our modern culture too often appeals to the basest of human instincts.

Until the Church cleanses itself of the scandal and corruption noted by Weigel and others, its proclamation of those eternal truths will unfortunately fall on deaf ears.