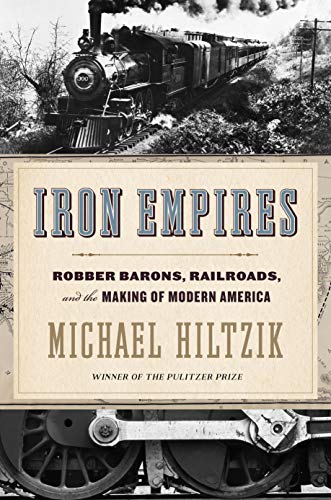 On May 10, 1869, as the last ceremonial rail was bolted down at Promontory, Utah, a San Francisco newspaper declared America’s first transcontinental railroad a “victory over space, the elements, and the stupendous mountain barriers separating the East from the West.”

Ensuing coast-to-coast celebrations—including the firing of one hundred cannons in New York City—marked the epochal moment. The linking of the Union Pacific and Central Pacific railroads underscored the emergence of the “titanic enterprise” on rails—America’s first big business, writes Michael Hiltzik, author of Iron Empires: Robber Barons, Railroads, and the Making of Modern America.

For the post-Civil War nation, untold possibilities lay ahead. The economy would boom, with railroads providing new jobs and moving passengers and freight swiftly from city to city. Business leaders—Vanderbilt, Gould, and all the rest—would be “lionized as a new American aristocracy.”

And it all came true, at a cost. Railroads made some individuals “too rich and powerful for the good of the nation,” says Hiltzik. They became “exploiters of labor.” Their constant mergers, ostensibly to eliminate “excess” competition, allowed “excessive freight and passenger tariffs.” They played an “almost despotic role” in late 19th century American life.

“We do not ride on the railroad,” remarked Henry David Thoreau. “It rides upon us.”

A Pulitzer Prize-winning journalist with the Los Angeles Times, the author offers a bright, lively, information-packed recounting of this familiar Gilded Age story, with its clashing entrepreneurs, labor strife, booms and depressions, and stock market frenzies and panics. “Investors would be rooked, whole communities defrauded, tycoons created and others bankrupted, family fortunes established for generations and others destroyed by a single heir’s folly.”

In the end, these “malefactors of great wealth” would face the ire of trust-buster Teddy Roosevelt.

Hiltzik tells a complex story of capitalists engaged in constant deal-making for control of rail companies. While recognizing their considerable achievements, he sticks with “robber barons” in describing them—a term introduced in journalist Matthew Josephson’s classic The Robber Barons (1934).

They were certainly a mixed group of scoundrels.

The patrician-looking Cornelius Vanderbilt, who died with his fortune intact (many did not) displayed “the upbringing of a wharf rat,” said one historian. Despite his reputation as an unmannered brute, he made the founding gift to Vanderbilt University in Nashville.

Jay Gould, quiet and retired, was “small, cadaverous, bearded, with sunken glittering eyes,” wrote Harper’s Weekly, and proved a sharp strategist in schemes involving other titans. He “at least had the good taste to stay out of the public eye,” writes the author.

Not so the gregarious “Jubilee Jim” Fisk. A stout and vulgar clown, he paraded about in fancy suits with the “improbably buxom Josie Mansfield,” his mistress, on his arm. Like Gould, he operated out of Boston without principles.

Ned Harriman, a pastor’s son, manipulated and finagled like the rest. He founded the world’s first Boys’ Club on Manhattan’s Lower East Side, and became a household name after leading naturalist John Muir and two dozen other scientists on a much-touted two-month coastal expedition of Alaska’s wilderness.

The public viewed the “ostentation and excess” of the railroad barons with “disgust, fascination, and envy,” writes the author.

Hiltzik traces at length the financial adventures of these men, detailing their manipulation of stocks on a virtually unregulated Wall Street. He also describes major events of the era, from the graft and corruption of the 1872 Credit Mobilier Scandal, a complex financial scheme involving members of Congress, to the Pullman Strike of 1894, which was led by Eugene V. Debs to win better pay and working conditions and crippled rail traffic nationwide.

Business readers will welcome the intricate stories of financial escapades in Iron Empires. Others will savor close-ups of power-hungry titans. All will undoubtedly be struck by the parallels between that Gilded Age and our own, when the rise of yet another innovative and disruptive technology has made titans of Bill Gates, Jeff Bozos, Mark Zuckerberg, and others.