The Irish: A Photohistory 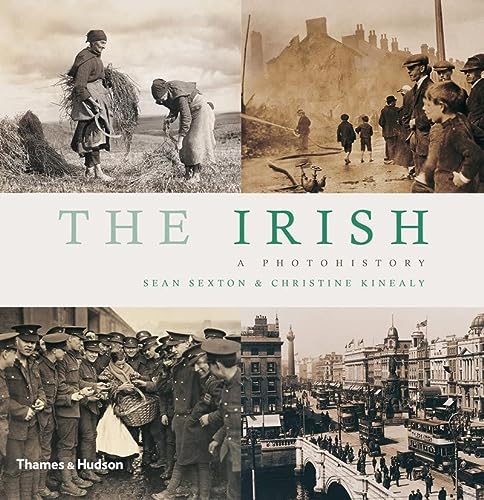 To cover 100 years of Irish history in one volume of photographs is a daunting undertaking. The period from 1840 to 1940 in Ireland saw one of the greatest catastrophes of the century—The Great Famine—and included insurrection, partition, independence, and as if all that were not enough, civil war.

In their book The Irish: A Photohistory Sean Sexton and Christine Kinealy have taken on this mammoth task and succeeded in capturing the essence of that turbulent century.

It is a heartbreaking tale of a people desperately trying to survive in harsh poverty at the whim of absentee landlords, some of whose agents acted with unimaginable cruelty. The early photographs capture this life in all its bleak intensity. The camera records women trying to cultivate stony fields and grinding urban poverty.

At the other end of the social scale, the life of the landed gentry is recorded. Their opulent mansions and gorgeous clothes contrast, almost cruelly, with the meager lives of the tenants and workers on their lands.

The authors argue that photographs “. . . challenge or confirm our perceptions of Ireland between 1840 and 1940 by providing fuller and more nuanced information than many written records. The collection of photographs presented here fully attests to the ability of the image to express what is so often inexpressible in the written word.”

We are left to weigh whatever perceptions we have or may have had of Ireland's history against these compelling photographs, and the accompanying narrative presses home their emotional impact. To read about eviction is one thing, but to see those evicted sitting in the rubble of houses that have been razed with battering rams is quite another.

Old photographs present a particular challenge in a world obsessed with Instagram and Photoshop manipulation. These old photographs were taken mostly with fixed wide-angle lenses. Their subjects are often far away, and their techniques are unfamiliar to a modern audience. It is, ironically, the unfamiliarity that makes these photographs so much more arresting.

We scrutinize them in a way we would not with modern photographs. With this book we are opening a door to history and peering through into a world we have never experienced. Every detail suddenly becomes important. The authors, for example, invite us to look at a photo of the imposing and ornate Orange Hall and then to notice the barefoot children on the street in front of it.

One of the heroes of this book must be Nicholas Burnett who identified the processes used in each of the photographs. The 19th century saw a bewildering variety of developing and printing methods and it is fascinating to see the differences between the different techniques. One of the joys of the book is to discover the beautiful early ambrotype portraits.

The book also helps us understand the challenges of early photographers: “The introduction of the dry-plate process in 1878, which meant that photographs did not have to be developed immediately, gave photographers relative freedom to move around, since they no longer had to carry their darkroom with them.”

It is hard to imagine the difficulties faced by a photographer traveling around Ireland in the 19th century and the book makes us realize we owe a huge debt of gratitude to the pioneers who recorded events and a way of life that would otherwise have been lost forever. This could not have been an easy task.
The sad irony of this book is that there are no photographs of the most seismic event in Irish history, The Great Famine. The scale of the famine and the effects of poverty and emigration almost beggar belief.

“In 1839, when the first photographs were taken in Ireland, it was one of the most densely populated countries in Europe, with over eight million inhabitants; one hundred years later, its population had fallen to under five million.”

One of the worst disasters in Europe went unrecorded by photographers. What is left, however, are the photographs of the ravaged faces of the survivors and the appalling conditions that followed.

This history is not always bleak. There are surprising and charming photographs: children playing, intimate scenes of domestic life, a woman breastfeeding. There are also some beautiful photographs by Christine Chichester, including a touching photograph of a group of dancers on a rock in the Arran Islands.

As the story moves into the later part of the 19th century we witness the growth of prosperity fuelled by the shipbuilding and linen industries of Belfast. It is easy to forget that Belfast, in the 19th century, was one of the great engines of the British Empire’s wealth and power. We see Belfast at the height of its power and the images underline the tragedy of its decline into sectarian mayhem in the latter part of the 20th century.

Any compendium of photographs must, by necessity, provide only a relatively shallow portrait of the subject matter and there are many moments in this book when we are tantalized by just a glimpse of something we want to see more of.

In a world where millions of photographs are uploaded hourly to photo sites, we have lost sight of the role of the curator. This book has been deftly curated to tell a complicated story and reminds us how important the role of curator is. These photographs of Ireland matter because they allow us to do something really important. They help us to understand history.

Declan O'Neill for the past 15 years he has run a photography and video production business in New Zealand. He has published three books on the New Zealand landscape and writes articles on the practice and craft of photography.