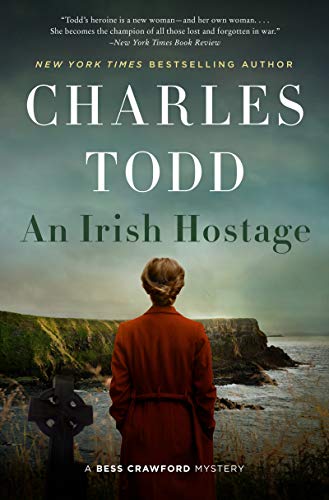 “As in the other books of this series (and there’s no need to read them before An Irish Hostage), Bess demonstrates presence of mind under fire, strong nursing skills, and adept calls of judgment.”

An Irish Hostage, the 12th book in the Bess Crawford mysteries by Anglophile writing team Charles Todd, tackles a far-from-peaceful follow-up to the Great War (World War I): the bitter, harsh, and violent eruption of Ireland’s battle for independence from Britain.

War nurse Bess Crawford has little awareness of the extent of British repression on the island nation. Nor does she grasp how much damage her country has done in holding Ireland against the will of most of its people. Of course she’s intellectually aware of the shameful starvation inflicted during the Potato Famine (a few British tried to help, but mostly the widespread deaths were ignored or taken advantage of), but she’s ignored the current independence movement and the again-brutal steps Britain has taken against its leaders.

So her arrival in a coastal village to support another nurse’s wedding—she helps rescue that nurse, Eileen, after the sinking of the ship Britannia and wants to stay a friend—leads to levels of threat and danger that she never anticipated.

Clearly, Bess and another English friend there for the wedding are despised by the neighbors, and even by the bride’s family. Could they actually be targets of violence themselves? When the groom himself is kidnapped as Bess arrives, and a vigorous search fails to find him, she and her friends must wonder whether he’s still alive.

In an era sadly shorn of eligible men, through wartime deaths, Bess feels she’s on her own. But in reality, her powerful English father, a military leader himself, and her de facto foster brother Simon are watching over her from a distance. That doesn’t stop Terrence, a devastatingly alluring (if scarred) cousin of the bride, from telling her what to do and dragging her into public appearances. Nor does it protect her from the horrible things Eileen’s pro-independence grandmother says about and to her. Bess is baffled and says so to Terrence: “ ‘Why is she so bitter?’ I asked as we came up to the front door.” Terrence’s curt response is, “You haven’t lived under foreign rule, have you. Or you’d know.”

Bess turns her attention to Eileen, who’s desperately afraid her marriage won’t happen, since her beloved may well be dead.

“Taking a deep breath, I made myself look at the woman riding several feet away from me. It was Eileen I should be thinking about. And how on earth I was to help her find Michael, so that she could be married. So that I could go home. … We were passing the place where we’d stopped to look out at the sea, when there was a loud report that startled both of us and the horses. Eileen said, ‘What on earth—’ But I knew what it was. A rifle shot. God knew, I’d heard enough of them in France to recognize them in my sleep!”

There’s a lot to keep straight in this fast-paced historical mystery: the Irish independence factions in their many divisions, the motives of the criminals (who eventually take a second hostage!), the men Bess is looking at in fresh ways, now that she’s likely to be released from her wartime nursing commitment and in need of life decisions ahead. Todd’s display in particular of the local rivalries is tough to follow, for both Bess and the reader.

But as in the other books of this series (and there’s no need to read them before The Irish Hostage), Bess demonstrates presence of mind under fire, strong nursing skills, and adept calls of judgment. Though she can’t control her surroundings—including the absence of antibiotics, not yet available for the infections of war wounds or criminal ones—she assesses her allies swiftly, and does her best to ensure what she needs in order to go home again: the survival of Eileen’s husband to be, and the discovery of who’s holding hostages, and where, before murder cascades into situations she’ll never escape.