Invisible Rainbow: A Physicist's Introduction to the Science behind Classical Chinese Medicine 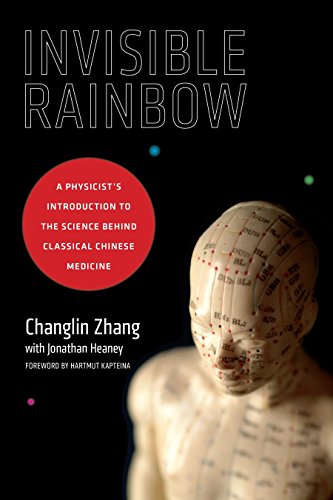 “Anyone who is interested in understanding how acupuncture works will enjoy this book.”

”Advances in physics in the last century have continued to move progressively farther from materialism into the realms of waves and fields and form considering closed isolated systems into open ones. It is these advances that have enabled a scientific framework to be developed that correlates with the concepts of Classical Chinese Medicine and explains how acupuncture functions.”

Physicist Changlin Zhang has identified a new science behind acupuncture.  Pointing toward a spiritual revolution with the sensitivity of a meditation master, Zhang gently opens the door to a world beyond naïve materialism to unpack the Invisible Rainbow. He gently and deftly moves objectified and materialist science the side, exploring the subtleties of the wave-field matrix. In order to accomplish this, he first casts a critical eye upon the current state of science in the exploration of acupuncture.

Zhang establishes his credibility and ground by providing a concise history of physics. He addresses the important figures who have historically developed our current state of knowledge regarding physics. Zhang leads us into an array of comparisons between contemporary physics and various concepts of energetics from ‘dissipative fields’ such as auras to Ayurvedic medicine and acupuncture. He then analyzes each research method used for the study of acupuncture with a critical eye.

The Chinese edition of Invisible Rainbow has a different subtitle from the English edition, which is somewhat telling. The English subtitle is, A Physicist's Introduction to the Science behind Classical Chinese Medicine, whereas the Chinese edition has the subtitle: Human Dissipative Structures. This idea of human dissipative structures refers to the field effect of biological systems which has a radiating presence that can be palpated by those with the appropriately developed senses. In a word, the dissipative structure might be called the aura.

A few areas of research are explored by Zhang where he shows that electrodermal testing is a tool for quantifying resistance of the skin and Zhang unpacks the problem of electrical resistance as a point of view, showing that variations of pressure creates unreliable findings. Further, the idea of the relationship between the nervous, endocrine and immune systems in the form of psychoneuroimmunology has been used to describe how acupuncture works. These might be in the form of shifting neurotransmitters, down modulating inflammatory cascades and altering the status of hormones. Even functional magnetic resonance images (MRIs) are used to show that a point on the leg may cause the visual cortex to possess increased levels of activity.

Zhang provides a worthy service to those who would investigate acupuncture research. Addressing each method systematically, he demonstrates those forms of inquiry that are fruitful and those that are not.

The authors present a fast paced piece of writing where the chapter names range from The World of the Blind to Measuring Coherence. They predict the end of reductionism as humanity faces complex systems. They also propose refinements in assessment captured in the question, “How much beauty is there in a ballet?”

They articulate three ideal states: chaotic, crystal, and coherent. This revelation creates a point of view that extends beyond the problem of acupuncture and early traditional medical practices. The result also brings the subjective and qualitative research consideration to the table. This is important in a world that is dominated by valuation of the objective, quantitative data as evidence for what is.

The emphasis in the Invisible Rainbow rests upon physics and awareness of the contrast between the wave and the field, which is a step forward from the wave-particle juxtaposition. Such an emphasis, however, does extend beyond the biological explanations for acupuncture, such as modulation of inflammatory compounds, neural transmission, and hemodynamics—all factors that remain pertinent considerations in our understanding how acupuncture works.

This is an excellent book that I have referred to the doctoral program director at the acupuncture school where I work. I was also surprised to see that our clinical director, who has Harvard research background, was carrying the book around the office.

This has much to offer anyone interested in new science and physics, but also traditional medicine and particularly acupuncture. It is a must read for anyone reviewing the evidence for acupuncture as it provides a concise review of research method relative to acupuncture and history of physics. Anyone who is interested in understanding how acupuncture works will enjoy this book. It is well written and easily brings people into the world of contemporary physics.

Dr. William Morris possesses two doctoral degrees: first in East Asian medicine and a PhD in Transformative Studies. He is an author with China’s largest medical publisher, People’s Medical Publishing House. Dr. Morris is president of 33 Publishing and is scholar in residence at AOMA Graduate School of Integrative Medicine.