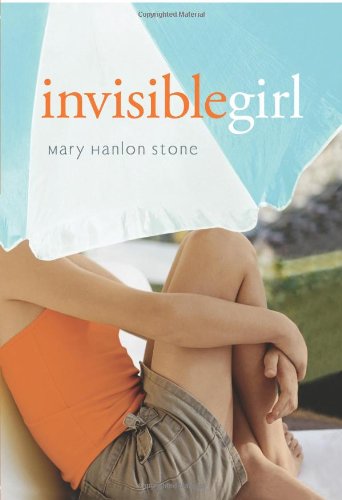 Mary Hanlon Stone’s debut novel is a fairly short book at 278 pages, but it is not short on the impact it makes. It describes, in realistic fashion, the inner life of an abused girl, struggling with her dysfunctional family and trying to do what any adolescent desires more than anything—to fit in.

Invisible Girl is the tale of fourteen-year-old Stephanie. She is the only child of an alcoholic mother and a father who is weak, wimpy, and totally ineffective at protecting her from her mother’s alcohol infused rages. Stephanie retreats into a world of literary fantasy as she reads and imagines herself as the protagonist of the Nancy Drew series, solving crimes and assisting her imaginary lawyer dad with his cases. She keeps a running list of “Warrior Words” at the ready—a list of vocabulary words she’s compiled over time to ponder upon and soothe her when times get tough. She’s going to need those words and Nancy Drew more than ever when her mother leaves the family and her father subsequently abandons her and ships her off—to stay with an old family friend in California while he pulls himself together.

Stephanie is forced to leave Boston and move to Beverly Hills where being a fish out of water doesn’t even begin to describe her new status. Her swarthy Italian looks and Boston accent make her an object of curiosity among her newfound “friends.” When the rich, golden girls find out who Stephanie and her family truly are, the journey really gets tough and she has to make a choice regarding how much is it worth to be part of the in crowd or be real and true to one’s self.

This reader questioned how realistic it was for Stephanie to have to leave Massachusetts and stay with the family of her father’s old friend across the country. The story made it clear there were a number of paternal family members available. There didn’t appear to be enough justification for such a drastic move. That being said, the story did come full circle and without giving away any spoilers, my concern was addressed.

Invisible Girl is a stellar first novel that clearly shows the author’s experience in working with troubled children as a district attorney in Los Angeles and as an advocate for girls. I look forward to reading her future work.