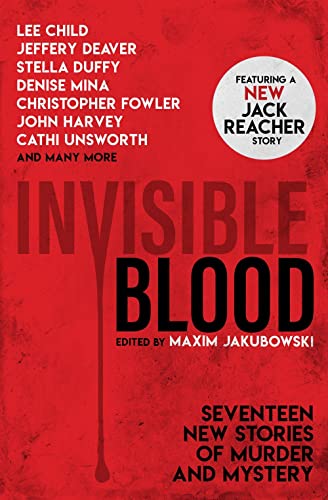 When you’re a dedicated novel reader, it’s hard to switch to short stories. That format is just too . . . short, and sometimes too intense because everything has to be packed so tight; you can’t warm up to things or come at them sideways.

But sometimes a brief zap of great writing is just what you’re in the mood for or have time for. That’s when anthologies like Invisible Blood are ideal.

This collection offers 17 stories by top names in crime fiction. The editor is deeply experienced in the field, and for this volume “decided to offer carte blanche to some of my favourite writers and friends, asking them to come up with a brand new story to celebrate the genre, irrespective of theme, period, or style . . . each and every one came up trumps with a tale that epitomises their storytelling talent.”

Between these writers we get a smorgasbord of different tastes and styles that not only suit a reader’s changing mood or limited time available for reading, but also provide a great way to introduce someone to the genre, or to try new authors’ works.

Several of the stories are pure psychological suspense, with any actual crime implied rather than committed. In “The Washing” by Christopher Fowler, for example, an observant neighbor tracks a young woman’s courtship, marriage, abuse, and the mysterious death of her cruel spouse by watching the changes in her laundry on the line across the way in their apartment complex.

Some stories are more direct and involve murder, especially “The Bell”  by Lavie Tidhar, wherein a woman will do anything to protect her son—including becoming an assassin.

After reading a few of the stories, it becomes clear that the “invisible blood” of title reflects a common theme: that all crimes against others arise from inner torment or cruel injustice, and in most cases there’s a twisted rationality behind the madness. This is most overt in Johana Gustawsson’s tale, “In the Belly of the Beast,” where we are drawn through a mentally ill woman’s mind as she struggles to separate herself from what she did to her sister and child and herself—but not quite getting there.

That story is one of several that are downright creepy; others are simply sad. In style, they range from classic police procedurals to one so experimental it looks like a long free-form poem. That one—“Blood on the Galway Shore” by Ken Bruen—puts every sentence on its own line and eliminates terminal punctuation. Unusual craftsmanship, but it does the job.

Across the stories in this anthology, protagonists are male or female, straight or gay, civilian or police or spy, rich or poor, old or young. The stories are set in different countries, though primarily US and UK.

None of them is better than any other because each must be taken on its own terms. But what they share besides the theme is darkness. Dark, dark, dark. The writing might be great, the plots fantastically clever, the originality awesome, but in the end they are all dark and depressing, especially if read back to back.

Not a collection to read if you’re in a down frame of mind. And if you’re upbeat when you start, chances are good you’ll be down when you’re done. So enter this anthology with your intellect in high gear and hang on to it throughout, because these stories are all intellectually outstanding. Don’t read them late at night, when alone, and looking for cheer.