Invisible as Air: A Novel 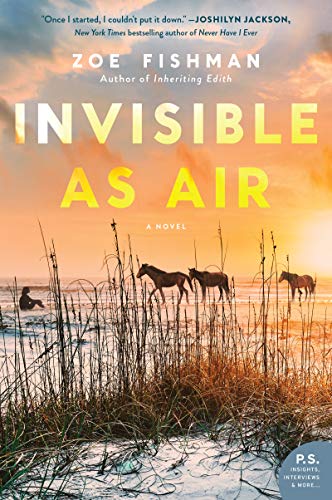 Readers of literature, especially those trained in the classics, come to every book and novel with not-so-deeply-buried expectations that the book they’re about to open, the story they’re about to embark upon, is somehow elevated by universal human struggles with high stakes and essential crises that will be layered and hidden with dramatic magic and transcendent lessons. We expect suffering. We crave hilarious. We want epic; we need poetic language magnifying small, desperate moments into unforgettable conflicts. We yearn for the author to hold a mirror into the Human Condition with a capital “H.” We demand it to be memorable; after all, Literature reflects us individually and collectively, our historic and indomitable efforts to survive, thrive, and love at all costs.

And yet, this kind of superlative is rare; publishers and agents work diligently in this environment of expect/exploitation, producing a lot of books, packaged with the latest design trends and snappy blurbs to sell readers on a definable product. The promise of a secret answered, a life “changed forever” and other clichés. Who cares about literature anymore?

Invisible as Air by Zoe Fishman is not an exception. The cover is beautiful and romantic, a yellow beach scene with sand dunes and wild horses in silhouette. It feels like literary candy, a product you just can’t resist. And you can enter that world just by reading the blurb and opening the book. No side effects. Melt in your mouth.

The secret begins almost immediately as Sylvie, the long-suffering wife of Paul and mother of 12-almost-13-year-old Teddy slogs through her miserable interior life, three years after her daughter Delilah is stillborn.

Sylvie happens on a stash of her husband’s refused pain pills—Oxycondon. His ankle has been broken for a while, and she has held up the household with one arm, doing everything with a shallow smile—and now she just wants to scream.

Paul is always saying the wrong, condescending thing and Don’t you dare! bring up their dead-and-gone daughter! It’s the third anniversary of Delilah’s birth/death, but if you utter a syllable about it, we are all going to evaporate! Everyone is walking on eggshells, including Sylvie, who has added despair to her mental state.

And in this weak moment, she’s also desperately curious. Surely one little white pill can’t be all bad, can it? Maybe she’ll be able to endure being Paul’s unwilling nurse for a little longer, perhaps long enough for his ankle to heal; maybe she’ll be able to stay in this relationship, long ago repressed into an endurance; maybe she’ll be able to wipe away the sight of all the sporting goods and gadgets he’s filled the garage with. Maybe she can just take one pill to get her through this horrible day, and she’ll never have another. Easy peasy.

Sylvie takes a pill, and suddenly her mental state soars; she’s light, optimistic, even happy. The reader feels relief as Sylvie becomes perky, hopeful, and above all, generous. Everyone notices the shift, but they’re so happy to get rid of this snarky person who is now charming and thoughtful that they don’t put two and two together. What could be so wrong with this? Sylvie asks, exonerating herself in advance for the guilt she is already feeling.

But the pill also allows her to speak her mind in a truthful way, in a manner she has been unable to muster since her daughter died. And with this voicing of the truth, she releases her son from a dreaded obligation: to attend a party for his Bar Mitzvah. So things are actually getting better because of this dangerous, addictive drug. Her son crafts a more acceptable event out of his Bar Mitzvah, and his new girlfriend, Krystal, isn’t really that bad, after all. Just one more, Sylvie tells herself.  The tension between herself and her husband, Paul, eases.

And so it goes, as Sylvie goes through her secret supply, which she has hidden in a purse on a hook in her closet. Meanwhile, her very comfortable and ordinary modern, upper-middle-class world is filled out from Paul’s point of view. Paul is another addict of sorts, who covers up his existential angst by becoming a shopaholic and lately enjoying texting with a younger colleague who has been flirting him into her orbit.

Teddy, the emerging teen, provides the event around which the entire family will rotate their anxieties, their unspoken grief, their expectations, and even their viability as a family. Teddy was nine when Deliliah died, and he observes his parents keenly, discovering his Mom’s stash of dangerous pills and his Dad’s temptation texts. Now we have competing secrets in a troubled marriage.

Sylvie is creative and bold in her journey to procure her magic pills, and as the days tick by, she finds herself in the midst of a nightmare. The author deftly describes her deteriorating emotional state as the pills begin to wear off, and buoys us all up again, once she pops them into her mouth. Thus, the reader stays close to her increasingly frantic journey with an ever-dwindling supply of addictive drugs. Like Scarlet O’Hara in Gone with the Wind, Sylvie promises that she’ll think about it tomorrow; she’ll quit tomorrow, she’ll deal with it tomorrow, the next day, after the Bar Mitzvah.

The easy-to-read and absorb book rolls out like a TV series, a pleasant ticking of the required boxes of modern novels—and told with enough detail and moderate suspense to keep the reader reading this piece of literary candy. The reader, just like Sylvie the addict, promises herself “Tomorrow I’ll read a Booker nominated book . . . tomorrow I’ll check out that Nobel Prize-winning epic. . .” But Invisible as Air is so easy to consume, it’s like a bag of Cheetos—with just the right amount of fat, salt, and cheese to make you keep eating until the bag is empty.

The author admits that she experienced several tragedies while finishing this book; but the tone, the setting and even the conflict does not allow the reader to understand the depth of suffering she must have endured. The ending, although suspended, feels like a happily-ever-after, everything smoothed over, nothing to haunt the reader into thinking about the story or characters afterward. Except for a loathsome gesture to Sylvie’s husband’s best friend, demonstrating the depth of her depravity in her addiction, there is little to elevate this struggle to the level of literature’s great expectations.