The Invention of Medicine: From Homer to Hippocrates 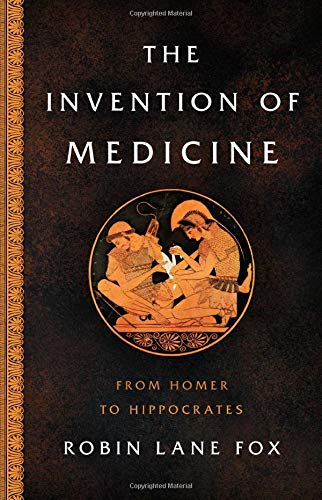 “Historian Robert Lane Fox adds fact and understanding to the general public’s knowledge and misunderstanding of medicine in classical Greece. Many questions remain but he finds answers not just by literary examination but also archaeology.”

Greek medicine, as with all other subjects Greek, comes first from understanding the mindset that would evolve into our modern thinking. These healers explored “the degree to which traumas and disease were ascribed by the gods and the social status of the doctors themselves.” Hippocrates, for example, became so famous that his name appears on an oath and in books he could not have written.

Anyone practiced medicine, taught by previous generations, although a class of professional physicians existed. Philosophers combined “what we now separate as medicine and philosophy.” Epicureans and even Pythagoreans would explore differences between knowledge and belief in healing “to contrast what is natural with what is conventional.”

Healers saw “the human body, male and female, as a natural entity and discussed the environment and lifestyles.” Greek doctors even explored gynecology, a subject later taboo for centuries. They could explore medicine with the same structure and concern for accuracy as historian Thucydides.

Cos and Cnidos in Eastern Turkey became centers of Greek medicine. The doctors of these polis belonged to the medical school or cult of Asclepiads, “from Asclepius, the god of healing.” Plato described the famed physician and teacher Hippocrates as an Asclepiad from the island of Cos.

In The Invention of Medicine, Ancient World historian Robert Lane Fox adds fact and understanding to the general public’s knowledge and misunderstanding of medicine in classical Greece. Many questions remain but he finds answers not just by literary examination but also archaeology.

Babylonian medicine existed long before Heroic Greece but “it is arguable that they [the Greeks] made much of it.” Even in the Iliad, however, Egyptian doctors receive attention. China had a medical legacy that the Greeks never knew.

Famed Roman physician Galen claimed, however, that Western medicine, as with much else, begins with Homer’s classic The Iliad. That poem described “about 300 wounds” and “about thirty are described in inner and outer detail of the body.”

Fox does not discuss the endless debate over authorship of the Iliad and the Odyssey; if those works represent real events; or how close in time to any events the Homeric poems come. The interest here lies between Greek medicine in the 700s BCE and 250 years later, when medical texts first survive.

Greeks appreciated the details of the battle wounds but “the emphasis of these detailed descriptions is on killing, not dying.” “Most of them befall victims whose past or present behavior is relevant to what they receive.”

“Judgements about dating and authorship must be made on the grounds of style and content.” Babylonian and Egyptian texts never read like the Greek works that, critically, lecture and teach not just prescribe.

“Super human heroes,” such as centaurs taught drugs “but most of these drugs were not divine items.” “No reason for a doctor to reason from the visible to the invisible” regarding wounds but “human expertise and appeals to divine intervention were not mutually exclusive.”

Herodotus and modern scholarship tells us about medicine overall in the classic Greek world. Hippocrates was the famous doctor, but other Greeks deserve note. Alcmaeon “not a doctor himself,” for example, rightly understood the brain but Aristotle challenged his theories.

Other ideas of Alcaeon such as “two paired opposites” causing sickness and ideas of other doctors such as Euryphon, are “with no link to reality.” Fox also discusses the importance of what ancient texts show about what the Greeks did not know.

Greek writers invented dialogues of famous people like Hippocrates they had never even met. Almost any historical detail on these physicians is suspect as is the authenticity of the Hippocratic Oath. Writers even exaggerated his age “to allow Hippocrates to live long enough to write the various later texts which had been ascribed to him.”

The reader does not need medical or philosophical knowledge to follow this clear and interesting text. It makes a good introduction to the Greek world in general. The book has a detailed and informative list of illustrations and useful maps.