Inventing Wine: A New History of One of the World's Most Ancient Pleasures 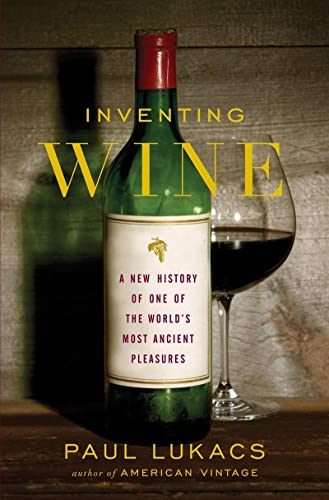 “Inventing Wine makes us grateful as wine lovers that we are living in the second golden age of wine.”

Wine has so often been hyped as the product of ancient traditions that it is easy to forget how relatively recent is the world wine industry as we now know it, and how much wine has changed over time.

Wine may always have been fermented grape juice, but not only have the grapes and the way they are grown and harvested changed, and the way wine is made and stored changed, but the way that people view wine and its place in our lives has changed radically over the centuries.

In Inventing Wine Paul Lukacs takes us through these changes, constantly reminding us how different wine used to be.

Mr. Lukacs, a professor of English at Loyola University Maryland, begins with the various speculations of where, when, and how wine was discovered. Having no idea how fermentation worked, people attributed the magic of wine to the gods. Consuming wine often had a sacred aspect, but the wine back then (and for millennia more) oxidized quickly, easily turned into vinegar, and generally had resin and other substances added to try to make it keep longer.

To us, the wine would taste quite horrible, and while some societies developed in Greece and Rome where people engaged in quiet discussion as wine was consumed, they did not contemplate and talk about the subtle nuances of the wine.

Still, consuming wine was often healthier than consuming the water, so wine became a staple in many parts of Europe, apart from its role in religious observances, and a wine trade developed in the Middle Ages. There was a local wine, which was not very different from the wine made locally in Greek and Roman times, and to which many flavorings had to be added to help disguise wine’s nastiness.

But there was also special wine made in the Mediterranean region, where the additional warmth could ripen the grapes sufficiently to make special, sweet wine that could survive longer transportation. Especially prized was sweet, strong wine made from dried grapes in the Eastern Mediterranean, called Romney. Who knew?

Mr. Lukacs leads us through the gradual shift in wine appreciation, beginning during the Renaissance, when some parts of western Europe were found to produce better wines than others when people took more care in the vineyard and winery, and there began to be a distinction between vin fin and vin ordinaire, although those terms were not yet used.

At the same time, wine’s lack of stability led to competition with other sources of alcohol, and gin, vodka, rum, and beer became popular. Wine had to improve to keep up, and extra effort went into cleanliness, and eventually bottling. Finally, scientists began to study wine in the 18th century, leading to Pasteur’s discoveries in the 19th century.

Just as wine was reaching a golden age in the second half of the nineteenth century, vineyard diseases ravaged the industry. Consumer preferences changed, cocktails emerged, and then there was Prohibition in the United States. Wine fell from its perch as the most desirable alcoholic beverage.

Mr. Lukacs recounts the development of new wine regions around the world, the emphasis on wine varietals, and the vast improvement not only of vin ordinaire but of vin fin as well, as wine clawed its way back to its current second golden age. The more recent history has been recounted in a number of recent books, and there is less new insight in the later chapters than in the earlier history.

Mr. Lukacs presents his story in well researched detail, although there are only eight pages of endnotes, and especially in the earlier, less documented eras, some of his conclusions seem to be inspired guesswork.

His general unifying theme, that wine evolved both technologically and in its place in society, with each driving the other (mostly) forward, carries through the entire book, making this more than a dry history of wine. He places changes in wine in the context of changes in society and the economy.

Inventing Wine makes us grateful as wine lovers that we are living in the second golden age of wine, when the quality and choices far exceed anything possible before. While giving us the very long view of the evolution of wine, Paul Lukacs makes us appreciate how we are constantly reinventing every aspect of winemaking and wine consumption. This is a useful reminder.