The International Brigades: Fascism, Freedom and the Spanish Civil War 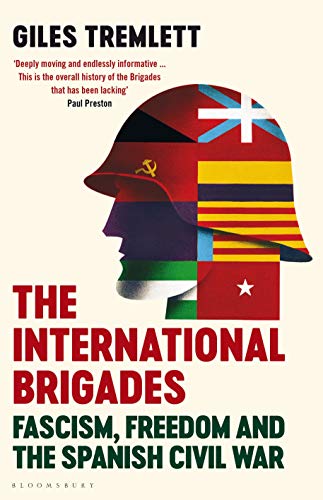 “A highly readable, monumental account of the idealism and suffering of the most international army ever assembled since the Crusades.”

More than 35,000 volunteers from 61 countries journeyed to Spain to fight in the Spanish Civil War (1936–1939), which pitted the forces of democracy against the fascist troops of General Francisco Franco, Adolf Hitler, and Benito Mussolini. The extraordinary story is vividly told in historian Giles Tremlett’s nearly 700-page The International Brigades: Fascism, Freedom and the Spanish Civil War.

Some 2,000 books have been published on the conflict, widely regarded as the “dress rehearsal” for World War II. Tremlett’s is the first based on unlimited access to the archives of the International Brigades in Moscow. It is also a complete account of the war—the first to appear in English in four decades—that attracted idealists, adventurers, journalists, artists, and writers from throughout the world.

“An armed battle against fascism had appeared in Europe and, for varying reasons, many non-Spaniards felt an urgent need to be there,” writes the author, a Guardian contributor. His gripping narrative recreates the heartbreak and heroism of the conflict.

Begun as a military-led, fascist coup d’état, the war eventually pitched “the timeless hierarchies of Church, army and landowners against the large urban proletariats of modern industrial Spain and their peasant allies in the poverty-stricken countryside.”

Mussolini eventually sent entire army divisions into the conflict. Hitler contributed Luftwaffe support. At Franco’s request, he dispatched 15,000 rebel troops from Africa, which saved the generals and enlarged the war.

Poorly trained and ill-equipped Republican volunteers stood little chance against the combined fascist forces. Besides offering a broad overview of battles in Madrid and other cities, the book recounts the individual stories of the liberal men and women who responded to the rallying cry of their generation and joined the Republican cause.

“The volunteers were a mixture of intense, ideological young men, city toughs, manual workers from factory floors and mines, adventurers, and those with nothing better to do,” writes Tremlett. “They were also, disproportionately, exiles and migrants (or the children of migrants). Most were passionate left-wingers. Together they formed an army of the devout and the displaced.”

They were a disparate, rather motley group. Fighting was often brutal and chaotic.

John Sommerfield, a 28-year-old Londoner, had left school at 16, worked as a stagehand and seaman, and written for communist publications. His group of English-speaking volunteers had been assembled by Charles Darwin’s great-grandson, John Conford, a Cambridge poet and communist.

James Yates, an African American from Mississippi, signed up without knowing anything about Spain or war. “Men like myself did not speak a word of Spanish,” he said.

Aleksander Szurek, a Polish exile who had been living in Normandy, was smitten by his first sight of a Mediterranean country: “How beautiful Spain is! I had never seen olive trees and orange groves where golden fruit hung from tree branches.”

These and others swore to fight for the liberty of Spain and the world: “My eternal enemies are, like the enemies of Spain, the fascists. I know that if fascism is victorious in Spain, tomorrow it will come to my country and destroy my land . . . I prefer to die than live under its yoke.”

More than 4,000 died. For survivors, the war was “the experience of a lifetime.”

Volunteers were often “absurdly brave,” writes the author. This despite the fact that machine guns jammed frequently, and many donated weapons were of museum quality. Yet the Brigades pushed back Franco’s well-armed troops in Madrid.

During one battle in a university’s philosophy library, “Jan Kurzke and his band of intellectual machine-gunners searched for sandbags to protect their positions but failed to find them. Instead, they found a new use for the thick, learned volumes on the library shelves.”

The volunteers had their cheerleaders. Photographer Robert Capa’s “pictures of volunteers in the trenches, huddled behind machine guns at University City, and helping women with their laundry, helped create the glamorous narrative of the International Brigades.” In their dispatches, the New York Times’s Herbert Matthews and other journalists lavished volunteers with praise and enlarged their mystique.

Tremlett notes that Jews, with their “longing for justice,” had a high representation among the fighters from abroad. One in five US volunteers came from the City College of New York, most of them Jewish, serving with the Abraham Lincoln Brigade.

Also drawn to the conflict were many literary luminaries, including Ernest Hemingway, whose novel For Whom the Bell Tolls, depicted the war, and the British author George Orwell. Their stories are compelling.

The volunteers lost the war, “but—with the outbreak of the Second World War a mere five months away—they would soon be proved right about the dangers posed to all nations by the unchecked rise of fascism,” writes the author. “That undoubted truth anchored their pride in later years and established their legend.”

A highly readable, monumental account of the idealism and suffering of the most international army ever assembled since the Crusades.