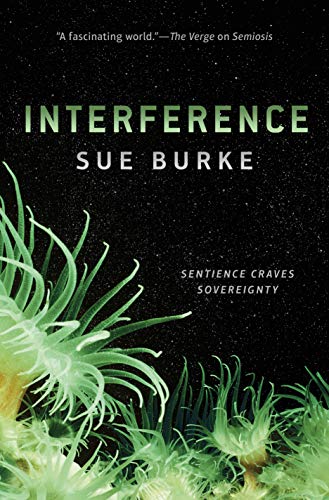 “Like Semiosis, this novel is a rich and engaging exploration of different forms of intelligent life and how they might think and act.”

Interference is the second novel of the brilliant duology by Sue Burke that started with Semiosis. In the first book, a spaceship of humans arrives at a planet to colonize it, intent on forming a peaceful society free from the politics of Earth. They find that they cannot escape human nature; but the real fascination of the book is the intelligent life that already exists on the planet: plants. Burke does a wonderful job of imagining what an intelligent plant might be like and giving one of them—a rainbow bamboo named Stevland—a dramatic and personal role in the story. By the end of the book, three very different sentients—human, plant, and another alien race known as Glassmakers—have forged a tenuous arrangement where all live and work together in a single colony.

In Interference, the fragile peace is disrupted by the arrival from Earth of another colony ship of outcasts. The new Earthlings can’t get along with each other, never mind with aliens, and their presence erodes the balance of mutual understanding, tearing the multi-species culture into vying, mistrustful factions.

While this is happening, an external threat grows: a colony of corals that uses their own unusual biology to spread and claim more and more territory for their own. The fighting colonists are largely unaware of the threat until it becomes critical, causing much of the growing suspense of the novel.

Curiously, it is Stevland, the intelligent rainbow bamboo, who carries this novel and presents a much more sympathetic and likeable character than any of the humans. The humans are mostly weak, selfish, and argumentative, and with few exceptions, do little to improve the situation. It is Stevland who has the wisdom and goodness to recognize the threat and find creative solutions to protect the others.

Like Semiosis, this novel is a rich and engaging exploration of different forms of intelligent life and how they might think and act. The conclusion is satisfying and will only leave readers wishing for more stories about Stevland and his kind.