The Interestings: A Novel 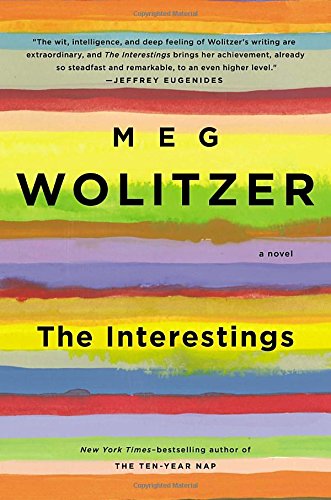 “A tour de force . . . expertly chronicles the experiences of the youngest of the baby boomer generation.”

Six teenagers meet and forge a lifelong group friendship during the midseventies at a camp for the arts somewhere in upstate New York. Sounds like every other coming of age tale following the characters into adulthood.

But Meg Wolitzer manages to render exquisite the ordinary—sometimes extraordinary—lives connecting the characters in her exploration of the often complex and multitextured individual friendships in The Interestings.

And the characters, much more than the plot, are what drive this novel as we follow six young adults of varying degrees of true talent as they launch themselves into the discovery phase of their twenties, the getting settled phase of their thirties, the midlife point of their forties, and the acceptance of their fifties, which is where the novel ends.

The book opens at the summer camp as the six protagonists, all of whom are given a voice in the novel, determine to make their lives different from and matter more than others’ lives. To seal the promise, they call themselves "The Interestings.”

Julie Jacobson gets the part of the primary narrative voice during much of the novel. The equivalent of a scholarship student at the camp—bearing the oh-so-seventies name of Spirit in the Woods—Julie is fuzzy haired, self conscious, and funny enough to make the group laugh out loud.

Ash Wolfe is the group beauty. Lithe and ethereal, she hardly makes a mark in the world until she discovers feminism and a love for the stage. She also adopts Julie, the outsider, into the group, immediately changing her name to Jules and effectively setting in motion Jules’ lifelong conflict between her socially impoverished roots and her desire to emulate and possess her best friend’s life and rarefied circumstances. Aside from her looks, the upper class New York lifestyle in which she effortlessly glides, and her singular proto-feminist determination, Ash barely exists, her role evolving into that of a living contradiction: that of the prefeminist caretaker and groupie.

Forever grateful to Ash for pulling her undeserving self into the group, Jules spends the rest of the novel—subtly and not so subtly—kowtowing to her best friend until an explosive mistake between them causes the still spritelike yet middle-aged Ash to shut out Jules, sending the latter into a tailspin of self-doubt reminiscent enough of the insecure teenage Julie to make the reader cringe.

Ethan Figman is the true talent of the bunch, a clunky, pale, nerdy kid, who draws as often as he breathes. Ethan loves the Julie in Jules, but Jules, infatuated with Ash’s brother Goodman, cannot return his love. So Ethan, unattractive, uber talented Ethan marries Ash, a classic pairing of Beauty and the Beast. Yet the relationship works.

Evolving into an animator extraordinaire and urged forward by Ash’s banker father, Ethan takes his childhood pet project to a studio, becomes an instant commercial success, and goes on to provide his wife and his family a life that he never dreamed of—and never entirely feels comfortable in. Like all limousine liberals, Ethan never escapes the middle-class guilt associated with the riches and fame heaped upon him.

Jonah Bay, the gay son of a famous folksinger, suffers an unspeakable and protracted episode of abuse during his childhood that informs the rest of his life, pulling him away from his innate musical talent and onto a road to adulthood that endlessly meanders as he searches for a place to belong and a love that will validate his existence.

Goldman Wolfe is Ash’s brother, handsome, carefree, and it turns out, perhaps more entitled than any male deserves to be. The group’s golden boy, despite his father’s prescient low expectations of him, Goodman shatters the unity of The Interestings when he is accused of raping a peripheral member of the group. The incident and the dominoes it tumbles, collapse the group into panic and threaten to rip them apart, effectively ushering them all into premature adulthood. Then right before he is to be arraigned, Goodman disappears.

While some of the others allow themselves to question Goodman’s innocence, Jules and Ash are sworn to secrecy by the Wolfes about Goodman’s whereabouts, and all we hear about him for most of the rest of the novel are scant details about his slow descent into loserdom.

While Goodman is the initial anchor of the group, the character who finally holds them all together in his ability to see them for who they really are as a unit is Dennis, Jules’ husband. Completely different from and largely indifferent to the members of The Interestings, Dennis is plagued by depression and spends most of the novel veiled in the blur of a semi-successful, largely blue collar job and its accompanying lifestyle that his wife, having given up her dreams of acting and comedy, so wishes they could transcend. But in the end, of all the characters in The Interestings, it is Dennis, after decades of observing The Interestings, who sees them all most clearly.

Set in New York City, The Interestings dissects the inner lives and complex entanglements of each of these characters in prose so straightforward that it often belies the author’s incisiveness, her skillful rendering of personality and conscience in each of her, pardon the reference, interesting characters.

For instance, a passage between Jules and Ash:

“. . . I know we live in a very sexist world, and a lot of boys do nothing except get in trouble, until one day they grow up and dominate every aspect of society,” Ash said. But girls, at least while they’re still girls and perform well, seem to do everything better for a while. Seem to get the attention. I always did.”

“Do you think we’re horrible narcissists—those of us who swept you up into our clutches?”

This exchange, a tiny one in a novel exceeding 450 pages, so captures the relationship between these two protagonists—as well as their differences—that it’s scary in its seeming ordinariness. But Meg Wolitzer tosses out subtle zingers like this on every other page, forcing the reader to delve beyond surfaces into a—voluntary or not—examination of self in relation to the text. In other words, if you were born in the late 1950s to mid1960s, this book is about you.

A tour de force examination of the expectations and successes, understandings and failures propelling a half-dozen well-fleshed-out characters, The Interestings captivates and digs in, then prods and unearths, firmly placing Ms. Wolitzer in the literary role of both seed and root, cultivator and harvester as she expertly chronicles the experiences of the youngest of the baby boomer generation.