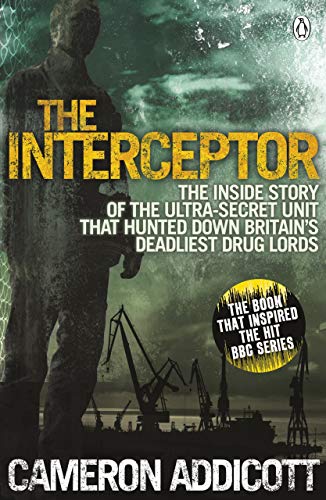 Isn’t it always nice when you find someone willing to offer a sympathetic and open ear to your daily tribulations, especially on the train or bus going home at night after a hard day’s work? Right? Not if that ear belongs to Cameron Addicott, otherwise known as The Interceptor. And the chilling beginning to this riveting memoir presents us with a little bit of eavesdropping on the master eavesdropper:

“But people can underestimate the power of listening.
Listening can kill.
Believe me, I know. I listened a man to death only yesterday.”

Addicott was a one-time member of the secretive and elite Alpha Projects unit—a group of dedicated undercover Customs officers who hunted Britain’s most dangerous criminals by extraordinary means, initially by interception and decoding their phone calls.

However, as time progressed, so did Addicott’s ability and obsession. No criminal’s secret was safe, be it sexual, monetary, drug-induced, or just plain old fashion murder-in-mind. Nothing was beyond The Interceptor’s reach, as far as gathering information was concerned in the frontline war against crime. In Addicott’s murky and seedy world, information truly was king, and he learned to save, savor, and then use it like a royal miser with gold.

Yet, despite his insatiable hunger as a hunter, Addicott obviously had a begrudging admiration for some of the men he was perpetually pursuing: “Even at the highest level, drug dealers still had to face rivals, backstabbers, hit men, kidnappers and grasses while keeping their communications secure, finding suitable investments for their laundered money—and innovative ways to enjoy themselves. You almost had to admire them.”

However, for all his tough-guy bravado, there’s a ghost of sadness in the pages, which Addicott attempts to camouflage. He may not have been married to the mob, but he sure as hell was married to the job, bringing with it the inevitable detrimental consequences on his real marriage to wife, Louise, of whom he candidly and quite coldly states he “no longer loved.” Further on in his life, a new love blossomed, but that soon wilted when he started bugging the woman’s phone calls because he suspected unfaithfulness. It would be truthful to say that Addicott eventually acquired Harry Caul’s (Gene Hackman, The Conversation) paranoia, even though most readers will concur that Caul was justified. . . .

The Interceptor is an adrenaline-pumping, page-turning book with intriguing plotlines and unforgettable villains and law enforcers, all imbued with human flaws and depth. Aficionados of “The Wire” or Jack Bauer’s “24,” will love its grittiness and on-the-edge-of-your-seat chapters. One word of warning before you rush out and buy the book: Be wary of that person sitting beside you on that long journey home as you read it. . . .