Intelligence: A Novel of the CIA 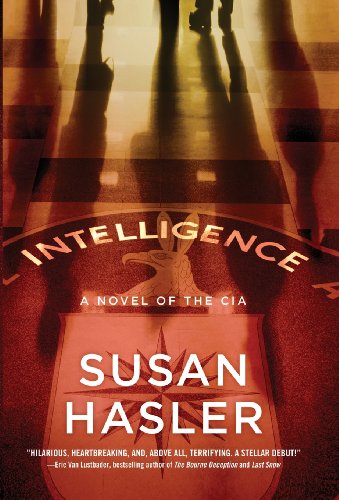 A 21-year veteran of the Central Intelligence Agency, Susan Hasler begins a new career as a novelist with this brilliantly written satirical thriller and blatant, all-out attack on her former employers. What the Agency expected back in the eighties when they hired an admitted anti-military protestor directly out of Cal Berkley is hard to guess, but it is certain that they are regretting it now.

Including flashbacks, Intelligence spans a time frame slightly longer than Hasler’s own stint in as a CIA counterterrorism analyst, from a year before the September 11 attacks to some years after the main thrust of the war in Iraq. A new threat propels the story as an Al Qaeda cell prepares a mass-casualty attack in the CIA’s backyard. Hasler’s quirky but heroic cast of analysts must fight through the counterproductive obstacles of absurd bureaucracy and politically ambitious managers in their increasingly vain attempts to avert the tragedy.

Hasler takes significant risk as a debut author by writing Intelligence entirely in the first person narrative, alternating the reader’s perspective among her small cast of main characters. However, she pulls it off well, including a hauntingly realistic view from within the mind of the Jihadist attacker that belies her expertise in the counterterrorism arena. The novel starts off with beautifully written, albeit occasionally foul-mouthed inner monologues interspersed with incredibly funny character interactions and dialogue. Her witty satire will leave readers laughing out loud despite the tragic setting. As the narrative continues, though, this brilliant writing gives way to much darker prose, something more akin to the bitter rantings of an angry, disgruntled employee. It isn’t that Hasler writes with any less skill, quite the contrary, but she applies that skill to increasingly vicious and thinly veiled attacks against nearly everyone from her former career field.

No one in the U.S. intelligence community, from low-level rookie analysts to former President George W. Bush, is spared from Hasler’s wrath. She seems to bear particular ire for the FBI and Evangelical Christians; she identifies the former throughout the book by an alternative name representing the illicit portion of the male anatomy, and she symbolizes the latter with a vulgar caricature reminiscent of Chaucer’s Summoner. In the end, without actually mentioning the acronym, Hasler even manages a scathing indictment of the real CIA for covering up vital intelligence regarding a fictional attack that took place only on the pages of her book. Thanks to her gifts as an author, the literary establishment will likely treat all of these caricatures and indictments as equal to historical fact for the foreseeable future. In fact, one reviewer has already stated “a lot of it is probably true.”

Unfortunately for Hasler’s former colleagues and chain of command at the CIA, Intelligence is a well written, incredibly funny, very entertaining read. With this devastating combination of fantastic literary skill and callous disregard for the men and women still struggling to prevent terrorist attacks, Hasler will likely do quite well in her new career.