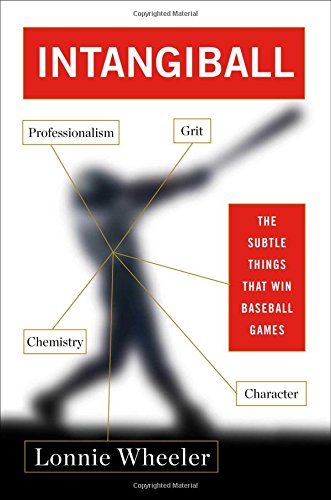 Veteran sportswriter Lonnie Wheeler’s latest baseball book, Intangiball: The Subtle Things That Win Baseball Games, is somewhat akin to trying to prove the existence of Big Foot. There is a whole lot of observing going on, but nothing that can be truly proven. And that ultimately is the major shortcoming of what is overall still an entertaining read for students of Major League Baseball.

In this age of a this professional sport’s overwhelming reliance on statistics driven by sabermetrics and Moneyball, author Wheeler takes a divergent tact, instead directing his focus to a host of factors he introduces as “teamship,” that over many major league seasons, have lifted less talented teams to greater heights than mere statistics would suggest.

Wheeler’s premise is that while the player’s individual talents remain the prime ingredient of a team’s success, the “intangibles” such as player character, team chemistry, spirit and make-up is truly the driving force in taking teams from a level of underachieving to championship levels.

As a beat writer who covered the Cincinnati Reds for the Cincinnati Post, the author sets the stage for his book with how the Reds changed the culture of the squad for the better after two of baseball’s major stars Ken Griffey Jr., and Adam Dunn departed. Once the two stars left, the players brought in to replace them and those who were overshadowed by their former teammates’ star-quality personas, came together to break a long string of years of losing teams.

In subsequent chapters he cites example after example of teams like the Mariners and Phillies who took similar paths, letting go talented stars who did not exhibit the matching drive to win, with teammates who made the whole greater than the assembled parts.

He also intersperses the team examples with pages devoted to statistic-lacking individual players like Orlando Cabrera and David Eckstein, who either seem to have a knack for landing on winning teams or by their own unique drive to “play the game the right way” led to them being the missing pieces to championship teams. Wheeler also devotes time to great managers like Joe Maddon, Joe Torre, and Tony LaRussa, who intuitively know what kind of player they need to put together a team capable of winning a championship.

But Wheeler saves his highest praise for New York Yankees shortstop, Derek Jeter. To Wheeler, Jeter embodies the inherent talent, keen baseball instincts and drive to win that the author notes is the recipe to concoct a winning team.

So while the book is still an enjoyable read for baseball fans, if you follow the game long enough, there is nothing startling new to Wheeler’s assertion there is more to the game than statistics. He does, however, show that ultimately those intangibles will continue to be the true heart of the game, taking an equal place beside the reams of black and white statistics.