Inside a Pearl: My Years in Paris 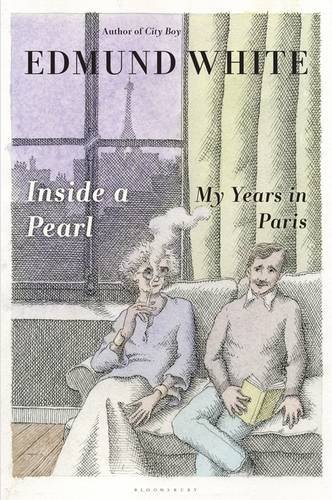 “. . . there is a bit of the mystic, of real magic to the whole of Inside a Pearl and all its component parts. And in its pages Edmund White once again shows himself to be a raconteur of the first order.”

The title of Edmund White’s new book Inside a Pearl promises a certain iridescence, a certain smooth, glistening polish in both the language and narrative, and in this the author delivers.

When it comes to sheer beautify of language, White is without master, as in this brief passage that opens the book:

“I discovered France through Marie-Claude de Brunhoff. I’d met her at a party in New York around 1975 and I’d been struck right away by how polished and elegant she as. Marie-Claude gleamed like the inside of a nautilus shell. She wasn’t tall, but she held herself as if she were. She had a white ivory cigarette holder into which she screwed one cigarette after another. A small group of Americans had already begun to object to cigarette smoke in a closed room, but at a cocktail party it still seemed inevitable. I chain-smoked and thought nothing of it.”

As the work memorializes the era begun in 1983, when White was 43 years old, when the author fled New York City during the Age of AIDS, for Paris and a population comprised of people named things like Marie-Claude (soon, she is referred to only as “MC,” which is both an abbreviation and a way of defining her role in society) and life was, if not perfect, certainly idyllic.

Given the circumstances, both personal and cultural (White’s emigration is made possible through a Guggenheim fellowship made possible by his friend, Susan Sontag) surrounding this exit from Manhattan, where the “gay cancer” had only recently been redubbed as ARC and then, later, as AIDS, where White had once been the head of Gay Men’s Health Crisis, it is hard not to read this memoir with the echoes of other accounts, most notably Larry Kramer’s polemics published in the New York Native that fell like an acid rain then and still sear now, and Sean Strub’s recent, excellent Body Counts, ringing in your ears.

Indeed, reading of White’s various intrigues, linguistic, cultural, artistic, and sexual, it is hard not to think of him as rather like those who held pomanders close up to their noses in order not to smell the reek of death as they hurried to their carriages to flee 14th century London and the Black Plague.

And so he went to Paris.

And it is apparent that, in remembering these years of exile, White continues to wrestle with his decisions, his actions, as here, where he writes:

“Although I make the eighties sound lighthearted and frivolous, I was haunted by AIDS, as were most gay men. I was diagnosed as positive in 1985. Although a diagnosis galvanized many writers, I just pulled the covers over my head for a year. I was very depressed. I felt so isolated and read about ACT UP in America with envy. I belonged to no AIDS community in France. Larry Kramer attacked me for devoting seven years of my post-diagnosis time to [writing a biography of fellow author Jean] Genet. Larry felt every gay writer must write about AIDS alone. I wanted to remind readers that there were these great gay contemporaries (Genet died in 1986) who had nothing to do with the disease. Our experience couldn’t be reduced to a malady. I didn’t want us to be ‘re-medicalized.’

“I survived because I turned out to be one of those rare creatures, a slow progressor: someone whose T-cell counts fall steadily but very slowly (nonprogressors are those even rarer men and women who never get sick). I didn’t know that when I was diagnosed; I thought I’d be dead in a year or two. I’m not a mystic and I don’t meditate, but one day in 1986 when I was meditating, in my amateurish, mud-pie way, I interrogated my body and it told me I was going to survive.”

Indeed, there is a bit of the mystic, of real magic to the whole of Inside a Pearl and all its component parts. And in its pages Edmund White once again shows himself to be a raconteur of the first order.

Inside a Pearl is a cocktail party of a book, filled with gossip, anecdotes—literary and otherwise—and innuendo all blended to perfection so that sipping them is like tasting the perfect martini.

It passes, as all literary memoirs now must do, the “Gore Vidal Test,” as the acidic Mr. Vidal, most especially since his death, has become the sina qui non celebrity mention of the day (much as Tallullah Bankhead, or, more recently, Elaine Stritch has been the necessary mention in any theatrical memoir of merit).

The mention of Vidal in Mr. White’s work is brief and pithy and made all the more intriguing by the fact that the two men of letters were introduced by Peggy Gugggenheim:

“Every artistic or political or entertainment personality who came through Venice felt obliged to contact Peggy, and if the dignitary was sufficiently important she’d give him or her a cocktail party. That’s how I first met Gore Vidal, who in those years lived full time in Italy. He blurbed my second novel, Nocturnes for the King of Naples, but later, toward the end of his life, he turned against me because I wrote a play about him and Timothy McVeigh.”

Short but telling: blurbed but ultimately dumped by Gore Vidal.

If perhaps Mr. White’s intent in moving across the Atlantic was to remove himself as best he could from the growing horror of the AIDS epidemic, then most certainly our author made the best move possible in moving to Paris.

He writes not only of physical transformation (“In New York I’d been shabbily dressed, but in Paris I became more and more smart. I shaved my mustache, which I’d worn for the previous ten years as an emblem of the gay clone.”), but of a beautifully liberating sense of starting over:

“Someone said that if you’re depressed in Paris, all you have to do is go outdoors and your spirits will be raised immediately. For me the transition felt more as if someone were lifting the lid and enabling me to float. I wandered idly, like a cloud, looking at the used books in the stalls along the Seine, the bouquinistes. Paris was full of things an older person likes—books, food, museums. Years later when an American complained of Paris I said, ‘I like it. To me it seems so calm after New York. As if I’d already died and gone to heaven. It’s like living inside a pearl.’”

And so, in his new memoir, Edmund White invites his reader to share with him the years that he spend floating. And the memoir itself seem cumulus, lighter than air, with the dark thunderhead of illness left (hopefully) far behind.

“After I was diagnosed with HIV, [White’s boyfriend] This was afraid of me. We grew apart, as I’d predicted. I wept often over my lost love and felt abandoned. Death was my constant shadow. My mother said to me, ‘It’s normal for someone like me in her eighties to lose a friend every month, but it’s strange for someone like you in his forties.’ I was attentive but not devoted to my dying friends; I thought, My time will come. I can’t suffer through this repeatedly.”

What memoir of the life of a gay man living in the ‘80s and ‘90s is not an AIDS memoir, no matter the author’s state of health? No matter the locale in which it is placed? What life in that era—especially a life lived in the arts, in and around New York—was left untouched?

What Inside a Pearl proves is two-fold.

First, that there was no distance available to be travelled that would allow Edmund White or anyone else to leave AIDS behind.

And, second, that no author of that age could help but write about it, whether by choosing to follow Larry Kramer’s lead or not.

For all the beauty of its language, for all the wit and wry commentary, for all the parties, the sex, the relationships short and long, hot and then not, Edmund White’s new memoir memorializes as many lost friends and lovers as any other AIDS memoir and traces the same snarled path of fear, despair, anger, hope and, ultimately, survival that all the best and most truthful writings of our joint lifetimes contain.

And so Inside a Pearl is an odd joy, containing as it does the details of a time adrift, yet so very crowded with details, especially those devoted to the enduring friendship between White and his Marie-Claude, which yields, in many specific parts of the work, its most exquisite writing, as if his particular love for his friend inspired this master writer on to greater heights.

As here, in this passage, in which the author’s sentiment lingers long after the reader’s eyes have moved on:

“By some magical fetishism, I sometimes think that if I dialed old phone numbers of friends, long since dead, they’d answer even if, in those days, there was one less digit in the number than now. By the same token, I think that if I flew to Paris and took the TGV to La Rochelle and a hundred-dollar taxi to Marie-Claude’s green door in its whitewashed wall, she’d be there, sitting in the garden, smoking, drinking good Lapsang souchong tea from a bumpy black metal teapot and a small glazed cup. She’d be in her rattan chaise longue, which she folded up at night and stored in the garden shed. There would be the pierced round metal picnic table painted dull green and the matching hard-metal chairs under the fig tree . . .”