Inside Out Medieval Castle: Explore the Ancient Fortress Behind the Iron Gates! 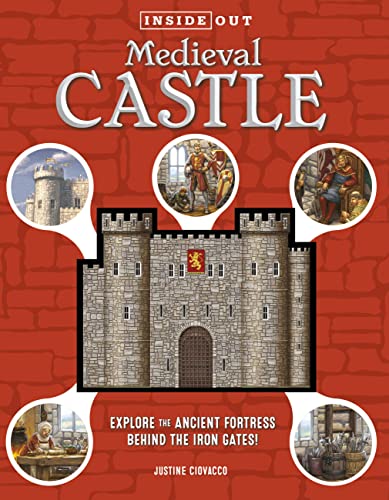 “Inside Out Medieval Castle provides an appealing introduction to a potent fairy tale symbol, bringing it into the real world.”

Justine Ciovacco does a thorough job of explaining medieval castles, from layout to purpose to daily life. There’s a section on medieval “waste disposal” that will interest every reader, along with gruesome details of how castles were defended with “murder holes.” The section on weaponry is a bit lacking, but there’s still plenty to engross young readers.

The people in the castle are introduced first with “the lord’s men,” meaning knights and an explanation of how nobly born boys were sent at age seven to a castle to train as pages. “They worked for knights and also rode horses, wrestled, and practiced using weapons. Some were also taught to read and write.”

Then we meet the large staff needed to run the castle, and a small paragraph takes care of the “lords and ladies,” saying, “The lord wasn’t necessarily old. In medieval times people didn’t have very long lives. Boys could legally marry at age 14 to girls as young as 12. Nobles did not marry for love; marriages were arranged by the families who hoped to gain power, land, and or money from the arrangement.” A sense of daily life is well described, and the art expands on what the words present.

The book provides this level of general information, focused entirely on castles in the United Kingdom. Crusader castles in the middle east and castles in the rest of Europe are completely ignored. So while the book does a good job of describing one particular type of castle, it’s not as broad as the title suggests. For children fascinated with the power and authority of castles, that probably won’t matter. For teachers and librarians, it could be more of an issue. Still, Inside Out Medieval Castle provides an appealing introduction to a potent fairy tale symbol, bringing it into the real world.