Inside the Mind of a Voter: A New Approach to Electoral Psychology 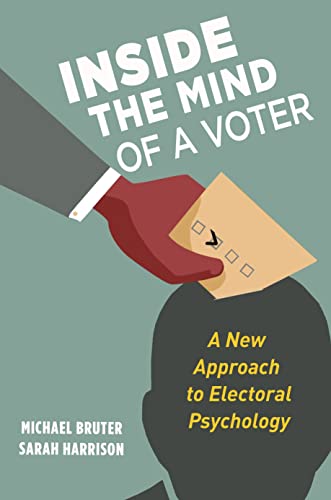 “This book is about what makes us vote as we do and keep coming back to this cultural ritual rain or shine, hell or high water.”

If you’ve ever wondered why some people never bother to vote and others view it as a sacred duty that must only be done in person on election day, Michael Bruter and Sarah Harrison will help you understand. Inside the Mind of a Voter shows you how the ritual of voting shapes us and how we, in turn, shape elections. Most research over the decades on voting relates to the outcome of elections—the parties or the candidates who won and lost—while this book is about what makes us vote as we do and keep coming back to this cultural ritual rain or shine, hell or high water.

Using new data from the United States, the United Kingdom, France, South Africa, Germany, and Georgia, the authors offer what they describe as a groundbreaking paradigm for viewing how elections evolve and change voters, as voters, too, evolve and change the electoral process. The purpose of the book is to address this question: “What are the effects of voters’ psychology (notably their personality, morality, electoral memory, and identity) on citizens’ electoral experience (including the emotions that they trigger), electoral behavior (including participation and choice), and sense of electoral resolution (including perceptions of closure, hope, and hostility), and how are those effects conditioned by electoral ergonomics?”

The book explores the purpose of voting—“conferring the ability to take democratic responsibility for influencing one’s community”—and examines the psychological bases of the electorate’s behaviors, how they experience elections emotionally, and whether and how elections bring a sense of resolution and closure to them.

Chapter 2 is a brief tutorial on electoral psychology, including various models and political theory controversies. It also introduces the authors’ basic, novel research design. Chapter 3 delves into the life of the voter in the 24 hours prior to voting in order to identify and understand underlying issues and emotions that affect how they make their choices, while chapter 4 describes the effect of personality and individual morality on our votes, “ultimately explaining that personality elements make significant contributions to explaining electoral choice.”

Chapter 5 explains new hypotheses about voters’ memories of previous elections and how these memories influence or fail to influence their current vote. Chapter 6 answers the question: “What if voters approach the vote . . . not according to whom or what they personally like, but instead constrained by largely subconscious and implicit conceptions of their role as voters, which they inhabit in every election?”

Chapter 7 zeroes in on emotions voters and non-voters feel during an election and concludes that “elections make people happy even when politics leaves them frustrated or annoyed.” Chapter 8 looks at how every aspect of an election and the process of voting itself affects the voter one way or another, while chapter 9 examines whether elections give voters what they yearn for: a feeling of control over the democratic process. Finally, chapter 10 summarizes what the authors learned from their vast studies and the implications of their conclusions for both elections and the electorate.

Unfortunately for the lay reader, this book reads like a doctoral dissertation or graduate school textbook on electoral psychology. For someone steeped in the subject, it will greatly add to their knowledge and provide them with an innovate way of viewing voters and elections. The average reader, however, may find the book more esoteric than accessible and end up frustratingly slipping and sliding through the material, grasping it, if at all, only with great effort. A scholarly work which needs to be respected as such, this book is not reader friendly in the manner that some political devotees might hope it would be.