Inside Broadside: A Decade of Feminist Journalism 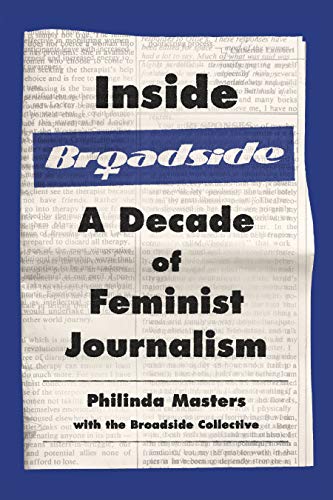 Broadside: A Feminist Review was a “groundbreaking” Canadian feminist newspaper published between 1979 and 1989. The title Broadside, chosen with much deliberation against some stiff competition such as Bias, conveyed the team’s desire “to be hard-hitting” as the term “resonated with the old-school idea of a political flyer.”

A reader of the Introductory Issue (May, 1979) responded to the name in a style that characterizes much of their future correspondence.

“I couldn’t for the life of me figure out why you had chosen the name Broadside for your newspaper. I took it upon myself to seize The Compact Edition of the Oxford English Dictionary (and my magnifying glass of course) to find exactly what the term broadside means. Much to my surprise I discovered that the term broadside, in nautical terms, refers to a discharge of artillery from the side of a ship. I took this to imply that your newspaper intended to hurl a series of volleys at the varying bizarre turns of the world’s events.” This letter was signed “For broadsiding, Ms. Sue de Nim, Toronto.”

The Broadside team were not seeking a mass audience, but prided themselves as “literate, intelligent, informed, smart women who operated with integrity and particularly with wit” on reaching out to and interacting with a like-minded readership on a variety of topics, many of which are still current: domestic violence, pornography, inadequate attention to women’s health issues, the intersection between feminisms, and between feminism & other major -isms, especially racism.

In this retrospective publication the editor notes some changes for the better to which Broadside might reasonably claim to have contributed. The term “Chair” has largely (at least in Canada) replaced “Chairman.” And “we don’t talk about mankind, or Mrs. or he.” Again this could be disputed among the less “woke.” She also notes advances in women’s rights on a number of issues —abortion, recognition of marital rape, autonomy in terms of loans and property ownership—again in the Canadian context.

Some of the limitations and obstacles that precipitated their self-closure are frankly faced. “We were an all-white collective, with an all-white sensibility which in itself was making us less relevant within a movement in which women of colour were seeking more voice and leadership.” It’s not clear whether or not they tried to diversify management and membership, but it seems not.

In addition, as a “feminist newspaper which incorporated a pro-lesbian, anti-heterosexist perspective” they were considered “too lesbian in some quarters and not lesbian enough in others.”

External factors named as contributing to their demise are the suspected government commitment to funding “doubly disadvantaged groups (black women, immigrant women, visible minority women—though clearly not lesbian women)”; and what seems to contradict this trend somewhat, the stated increasingly conservative stance of the government on the issues Broadside espoused.

This collection contains a range of articles by famous and less famous feminists and shows by inclusion of readers’ comments the impact the newspaper had on its chosen audience. Collections of ephemera have a built-in challenge of relevance; do they mainly highlight issues still unsolved, or do they show how issues relevant at the time of writing have been consigned to antiquity?

This publication strikes a good balance in this regard not least because many of the voices are still alive and well: Gloria Steinem and Margaret Atwood, for example, will be familiar to non-feminist and non-Canadian audiences, though inevitably the collection will be of most interest to those involved in the Broadside Collective during that formative decade.